The Adventures of Ten and Till

Languages:
Title: The Adventures of Ten and Till
Genre: Action

Buy The Adventures of Ten and Till

Buy The Adventures of Ten and Till Limited Edition BUNDLE (?)

“The Adventures of Ten and Till is something I can't recommend enough.”
9/10 – Shmups'n'Stuff

“Players looking for a charming, protracted shooter are encouraged to give The Adventures of Ten and Till a look. Beneath the veneer of pixelated visuals and the relaxing soundtrack is an accessible and engaging voyage into bullet hell.”
Tech-gaming

The Adventures of Ten and Till is a bullet hell shoot-em-up developed by Japanese doujin designer Toro Nishino. Created by a single developer, the game offers a robust shooting experience that merges gorgeous lo-fi pixel art with challenging gameplay reminiscent of classic CAVE vertical shooters. It features unique mechanics like on-the-fly character-swapping, a risk-reward scoring system, a variety of challenging stages, and an emotionally-stirring soundtrack.

・Intense bullet-hell gameplay inspired by famed CAVE shooters like DoDonPachi.
・9 stages (+ 1 special stage) and 10 boss encounters including a True last boss.
・2 different endings: Normal ending and True ending.
・2 playable characters that can be swapped on-the-fly with the press of a single button.
・Character-specific shot types as well as shared shot types.
・A risk-reward scoring system with score-based extends for racking up additional points.
・A shield mechanic that allows players to stack up to three barriers to absorb bullets.
・Unlockable side-bar art to customize your play experience.
・A breathtaking 25-track soundtrack that complements a touching story.

“Please... Save Lowres...” The voice of Princess Pixel resonated within the hearts of Ten and Till.

The peaceful land of Lowres had been swallowed by the “waves of evolution”
after losing the protection of its beloved princess.

Now, led by the voice of her Ladyship,
Ten and Till don the “power of feelings” and set off on a journey...

A journey to protect the light of Lowres...

There are two playable characters in the game, the titular Ten and Till. These two characters can be swapped between on the fly, with each one possessing their own strengths and limitations.

A swordsman-in-training. Overflowing with righteousness, Ten is a young girl who bears the swordsmanship and manner of dress passed down in her village for generations. (It's said that her home village's culture originated from another world long ago.) Ten's shot type is a powerful, concentrated burst that hits enemies directly in front of her.

An up-and-coming dancer. Till is a kind girl who brings smiles to the people of Lowres through her alluring dances. Although she's always being helped out by Ten, Till hopes to one day be able to support her friend in the way her friend’s supported her. Till's shot type is a less powerful but screen-encompassing spread shot that can hit multiple enemies at once.

By pressing the Shot Mode change button, you can switch between the two following shot modes. 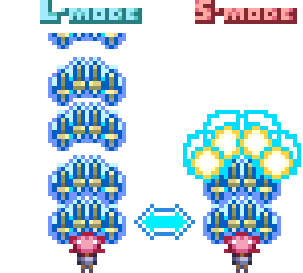 L-Mode is a shot that can reach far away, while S-Mode is a shot with short-range but high destructive power. There are benefits to using each, which are detailed in the game's manual.

Note: resolution is 800x600; hit "Enter" to switch to fullscreen; there is no TATE mode available.

© 2020 LionWing Publishing Ltd. All rights reserved. All trademarks are property of their respective owners.