“We want to thank all of our loyal fans who have been anticipating City Block Builder and in light of this, we'd like to give everyone a sneak peek into what we have in store for everyone. This will also be a great way to engage with the community and get everyone's initial thoughts and recommendation. We plan on working with the community very closely to ensure that we create the best Tycoon game since the early 2000s.

The player can expect to play a fully functioning restaurant build with marketing and research tree availability. Scenario Mode with a bunch of missions and the beginning of our Story Mode will also be available for the player to play around with. Following the month after the release, the Cinema Build will be available with an extension of the Story Mode and a few more additional missions as well. In the coming months after, we will constantly be adding more businesses to play around with like Bowling Alleys, Parlors, Bars, Casinos and a lot more.

You may face a few bugs and performance issues at the moment but we want to make sure that once the game is fully released, it will be smooth sailing for you. At the moment, our core focus is to polish the gameplay features and game mechanisms. We will be working day and night to provide you with the rest of City Block Builder when Early Access comes to an end while our Full Release creeps in. We look forward to hearing from all of you!”

“Our full version will feature an addition of multiple different business ventures.
- Bowling Alleys, Jazz Clubs, Bars, Drive-in Theatres, Salons, etc., basically almost anything in your imagination
- Our highly anticipated Story Mode, wherein you follow the life of Joey, a 1950's war veteran, to turn him in to the business tycoon he aspires to become. This mode will also be in a comic book style.
- Access to Scenario Mode
- Create your MOD's
- Voice acted characters
- Addition of different human and animal characters
- Unlock Achievements”

“City Block Builder Early Access version features the Sandbox mode of our game only with the capability of building multiple Restaurants. Also available are both are Scenario and Story Modes. The Scenario Mode will have a whole lot of quests and challenges for players to complete. The Story Mode will feature the beginning part of it with the completed version to come out in the next few months. In a month's time after the early access release, you will receive a free update with capabilities to build out a fully function Cinema!

With our early access Sandbox Mode, you will be able to play around with the following features:
- Research Tree
- Hire and Fire Staff
- Build multiple Restaurants
- Marketing Tools
- Manage your Finances”

“Early access will be cheaper than the Full Release of the game. This is to thank our loyal fans for their support!”

“The game will have features that allow users to communicate with us directly. We intend to include a "Send Feedback" option in-game which will allow players to report bugs, feedback and even provide ideas without having to interrupt their gameplay experience.

“Keeping a close eye on this one.”
Best – Cultured Vultures

The start of the quintessential American Dream is here. Los Angeles is in the midst of a cultural revolution and is bustling with immense amounts of growth throughout the city. Skyscrapers are being built. Tentwood is taking the city by storm and a utopia is on the rise with beaches, warm weather and palm trees. Los Angeles has become a real estate paradise with millions migrating from all over the world.

Follow the life of Joey, a returning war veteran that has just received a plot of land, as he weaves through his personal life and financial struggles with street smart and innovative decisions. Help him fight his struggles and discover the true face of LA. The time to build and invest is now! City Block Builder will be out for Windows on launch and will release shortly later on the Linux and Mac OS platforms! 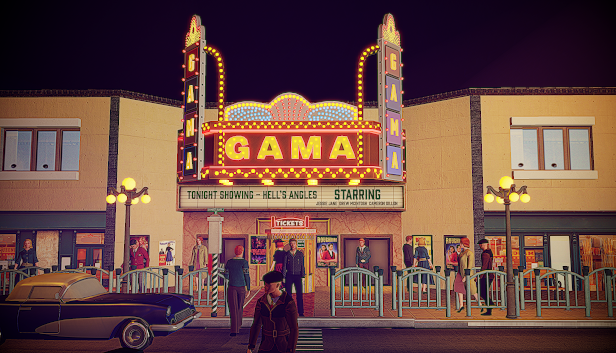 City Block Builder is a genre-blending tycoon game with micro and macro-management elements. Build your own business empire through an immersive game with easy to learn, but hard to master mechanics. Inspired by tycoon games of yesteryear, experience a tycoon tribute to the 50s. Build Restaurants at first, with Cinemas, Bowling Alleys, Shops, News Stands, Drive-Ins, Jazz Clubs and more coming soon!

Each business will have its own extensive research system with different nuances. Unlocking different parts of the research tree is based on their opportunity costs. Higher points unlock better rewards but you can adjust your goals for short term solutions. With the research approach in your hand, you are completely in charge.

Create The Business Of Your Dreams

Explore the game and harness your creative juices into building an engine of a business. Manage, and micromanage every single detail of your empire and aim for the stars. The perfect blend of gameplay with freedom, City Block Builder is surely up to the task of quenching your thirst for curiosity!

Right from the furniture to the lights, from posters to advertisements, feel what it was like to live in that era of America. With the signature style of 1950s LA, experience the art and aesthetic of downtown LA. Interact with, build and place items that once were the staple of that era. Movie posters, food, glitz and glamour, immerse yourself with what’s in store for you!