In this epic sci-fi saga, you begin your journey in an abandoned space station, with no recollection of who you are and with an unknown force that hunts you. To learn the secrets of your past, you must journey through a vast universe, visit strange worlds and space stations, and fight to regain your former glory!
All Reviews:
1 user reviews - Need more user reviews to generate a score
Release Date:
Developer:
J1 Game studio, BDU
Publisher:
J1 Game Studio
Popular user-defined tags for this product:
Action RPG Indie Strategy Violent Early Access Sci-fi Top-Down
+

“It is one of the best ways to get feedback from genuine players while the game is being developed, allowing people to influence important aspects of the game.”

“The game will launch sometime between february and june 2020.”

“Per September 2019 the released game is about 35% complete, containing a complete first chapter. Of course, adjustments can be made based on player feedback + features will be added that can be used in part I (enemies/weapons/armor/equipment etc.).

The complete game at launch next year will consist of three chapters. Chapter I is released October 2019. Chapter I+II will be released December 2019 and the full game will be completed and released sometimes between February and June 2020.”

“The early access version available now is chapter 1 and provide 2-4 hours of gameplay. All basic functionality is working and the game as per today lets the player test the most important aspects of the gameplay.

Chapter 2 will be completed by December (hopefully) and should provide further 5-10 hours of gameplay. Part 2 is about 75 % complete.”

“Yes, the price will increase as development continues. That said the final price will not be that of a AAA game but rather a indie game that provides many hours of gameplay and a good and interesting story-line (usually about 60-70% of a AAA game).”

“By forums on Steam and feedback on the games blog.”

In this epic sci-fi saga, you begin your journey in an ancient, abandoned space station, with no recollection of who you are and with an unknown force that hunts you. To learn the secrets of your past, you must journey through a vast universe, visit strange worlds and space stations, and fight to regain your former glory and your memories.

In order to prevail, you must gather allies, build armies and ultimately defeat your adversary.

Lost Empire 2977 is a 3rd person/top-down, single-player, action RPG, set in a futuristic sci-fi universe. The gameplay and combat are real-time, but you can slow time to aid your strategic and tactical decisions.

HOW TO PLAY? KEY GAMEPLAY FEATURES

The gameplay allows you to choose many different paths to finish missions and defeat your enemies.

You are invincible, and no adversary or spawned army can stand against you. Use your awesome powers and abilities and crush those who oppose you.

Bring your allies into combat and lead them to victory - or you can send them to fight your battles, while you concentrate on looting your dead enemies. Teammates also make great guards, just leave them behind and they will guard whatever area they’re in.

Use your resources to raise an army and swarm your enemies. Even better, rally your allies and spawned subjects to crush the enemy in one big onslaught. You can also send groups of spawned drones to weaken the enemy’s defences. Epic battles awaits you! 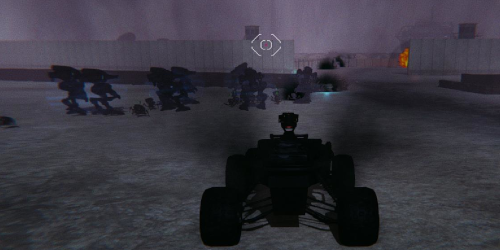 The enemy will attack your bases and resources. Don’t leave your bases unguarded. It’s nice to be able to leave an area after finishing the missions, so don’t let them steal your spaceship.

Tired of running around as a simple foot soldier? Use a Mech combat unit instead - or explore vast areas in your "Viper" (Advanced terrain vehicle)

Travel to strange alien worlds and visit remote space stations. Or, you can visit big, not remote stations to – you decide

Choose your character, race and class and journey through the universe as the character you want to be. You can choose between 4 races, 4 classes and two different characters (male/female) 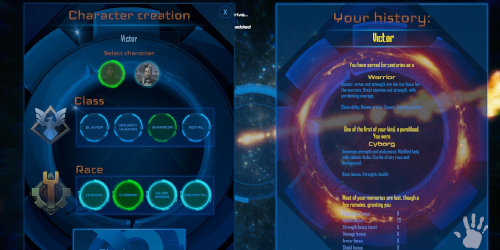 Contains small amount of violence (combat) and a mild degree of foul language.