They Can't Stop All Of Us

Languages:
Title: They Can't Stop All Of Us
Genre: Action, Free to Play, Indie, Strategy

Play They Can't Stop All Of Us

“They Can’t Stop All of Us is a live action PVP attack/defense strategy game with elements of RTS and the tower defense genre. It’s based on the hilarious Storm Area 51 meme, so you’ve got that tongue-in-cheek vibe which is reflected in the community.”

-B Michael B , Indie Game Developer 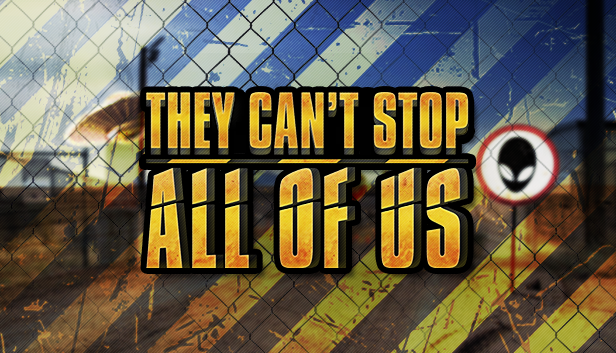 Counter different playstyles with your own dynamic strategy over an objective based battlefield with co-operative play and tactical depth.

You thought you just had to craft buildable defenses to hold down the fort? There’s WAY more you need to do to defend against the crazy onslaught of attacking memelords. I mean, you’re defending the most classified government secrets that ever existed - did you really think it would be easy?

Pick one of many defense classes that give your character different weapons, special abilities, and characteristics. Find out which classes you can leverage for the most effective defense by installing the game now - it’s free to play.

You’ll have a handy primary weapon, a secondary pistol, and a throwable or ability that can either become an invisible Sniper, eviscerate attackers, heal your teammates, or stun attackers with electrical blasts.

Hey, with a little DLC you can even customize the look of your defenders to express how much of a badass defender you really are. Prestige up through the social ranks of Defenders on our Discord chat and become the most popular defender with the dopest buildout. The community loves videos, so record your defense tactics and show us what you’ve got!

Craft unique and powerful armies of autonomous AI then send waves of them to seek out your enemy’s defenses and destroy the base.

Command legions of hilarious autonomous meme minions from various ranged and melee classes to decimate the defenses staged by your enemies.

Every attack is different, so you’ll need to mix & match classes of attackers to counter any of the defender’s tricky builds. If you want to see the kind of classes you can build, install the game now (it’s free yo!)

Your army will also seek to destroy the defenders themselves. All en route to destroying the base power.

Release the truth about alien disclosure from the clutches of the heartless government.

Great attackers are lauded in our Raider Discord. Share images, gifs and videos of your raids in our channels and get some fame. Some high achievers even level up to VIP status within our crew based on the prestige they build and the popularity they gain from sharing great attack strategies. Show your unique attack methods to become a famous attacker.

As a defender, quickly and intuitively craft custom defenses without limitations of grids like most Tower Defense games.

Place objects like flamethrowers, auto-turret machine guns, and barriers anywhere on the map to strategically funnel enemies into your traps.

Your defense reflects your personality - get creative and show our Raider community your most effective defenses. Gain praise from our discord community by sharing your defense - they love to upvote great builds and crafting strategies. Your build could gain you some popularity and ranks in our crew.

Be a part of the discussion whether it be showing off cool screenshots & videos or helping to discuss balancing and new content. You can join us on Discord by clicking the community link to the right of the description.

Thanks to SorensiC SteeL for making the awesome trailer showing off the 2.0 update!