“The game has been in development for a while now. There is a lot of content that is already available. However, we still have to balance out things and add strategies.

We have implemented most of the things we have wanted. The full release will be announced soon.


We feel that Steam is one of the best places to get in touch with experienced gamers who can take this game to the next level.”

“The full version will continue on what you have achieved in early access.

All the updates below have been implemented [except Blitz]:

We are hoping to add multiple updates [BLITZ version, trade, more diplomatic treaties, jobs, single player version] by then and add more in-game content like stories and maps. Iron out the algorithms and test the game at scale. We are also hoping to deploy on multiple servers throughout the world which should make for a more enjoyable experience with local competition.”

“At this time we have over 231 types of effects [3,602 individual effects] spread over multiple game actions that can be applied to your nation.
There are 154 algorithms that calculate a variety of aspects of nation-building.

The ideological content of the game is mostly done:
- 303 questions and 1230 answers
Out of which:


For more details and screens see the "description" / "about this" section.”

“We haven't decided how we will release the game. But right now we are leaning on a single buy price without any costly DLCS..”

“There is an in-game forum where the lead developer is accessible.”
Read more


After a number of incarnations on Earth and unhappy with the opportunities nations offer souls to grow, our hero, Kanli (you) is offered a chance to .. do better.
He will try, over a number of simulations, to build states that survive the hardships of time and scarcity whilst helping as many souls as possible evolve beyond the taints.

13 ideas that we explore in Minds of Nations

1 The Nation as a school for souls

You play the custodian of a state through millennia. The nation is both a state in the classical sense,
but also a school for souls that are interested in overcoming this plane.

You have to consider strength, the material needs of a community and the evolutionary needs the souls that take birth in your realm have. A sluggish state will have them stuck for centuries into the same thoughts, fears and vices. While a weak state may not provide enough bodies or opportunities in life.

2 Religion as the development of methods, not a popularity contest

Incarnated or not, souls generate ideas for you. Ideas are of three types:

The first is the spiritual path that your nation discovers.
Ascetics tired of the endless cycle of birth-rebirth and desire-aversion, are developing methods for transcending this plane of existence.

So they develop the stages of concentration, reflections, prayers, mantras, breathing and other techniques for purifying consciousness.

It does not matter how many people adhere to the path your ascetics uncover. It is NOT about having many provinces declaring themselves Catholic, but rather, having a path that frees more persons from the chains of desire, hatred. Having more methods that incorporate different mindsets, that free one from all attachments and bonds 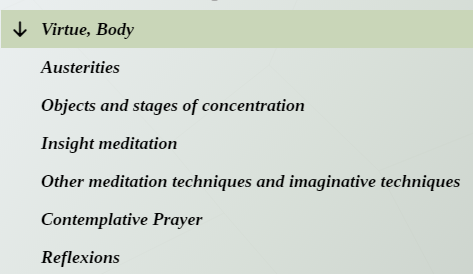 3 Governance as a collection of answers to society's questions

Instead of having broad systems like Communism, Monarchy, or Democracy, you use ideas to answer each individual governance questions like:

"Who leads our nation ?"
- It can be 1 person, it can be three, it can be a couple, it can be a council..
"How is that person chosen ?"
- Leadership can be inherited, elected by others and then you'd have to choose who can elect your leader. Only landowners ? Everyone older than 14 ?

-Or, your leaders can also be selected in more unorthodox ways:
- You can go the Athenian way and choose them by sortition, randomly.
- You can go the Tang Dynasty way and have examinations.
- Then, you select the exam subjects.
- Moralism ?
- Science ?
- Archery ?

Alternatively, if none of these options fit your vision, you can create really custom systems. Maybe you believe that the leader should be selected after a death match or some other way. You can add this custom option.

We approach every issue of community management in the same way, from economics to the justice system.

And many other options giving you complete control. 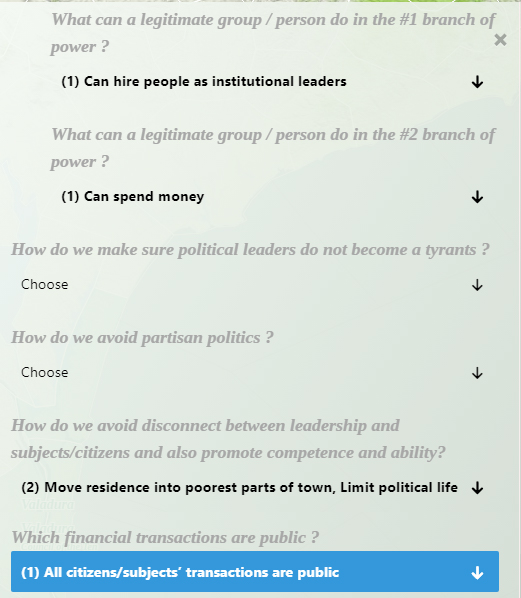 4 Effects that change over time

If you switch to an authoritarian regime, in the short run, changing government policies will be cheaper. But, in the long run, after the first generation of rulers die, corruption and nepotism will increase significantly.

Or, if you grant women access to office. You'll have a gradual increase in ideas, but a gradual decrease in natality. Less children per woman.

5 Effects that change based ON your production of their associated resources.

For example: you can get a one time bonus equal to 10 times your yearly food production. That way it is has value to you both in the early game and in the late game.

6 Algorithms that try to incorporate a bit of realism

Each working person: based on tech, knowledge of the technology throughout your state, and other datapoints - produce a number of kilograms of food per acre. Soil quality is also involved as "province fertility".

Consumption and food wasted, are based on the diet your economy and govt. encourage plus other options. A vegetarian diet will mean less food is consumed but more is wasted. A carnivorous diet will also give you a slight military bonus. etc.

We take a more general approach to technology, instead of individual discoveries, technologies are grouped into their parent subjects:

You need to carefuly watch your armies' food supplies, as they may disband before reaching their destination. Also, when an army goes to war, it takes with it a significant part of the labour force - decreasing the food production at home.

You can set your nation back centuries by taking an ill-advised opponent to war and having most of your working men die of starvation in enemy territory. 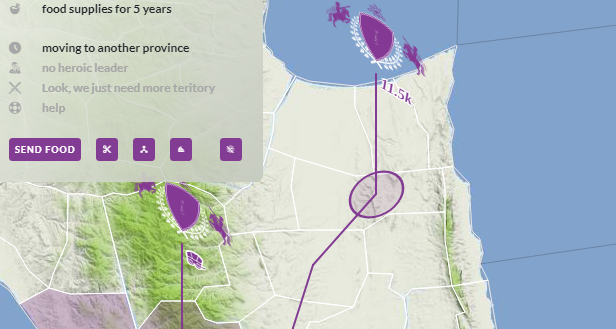 We explore the way politics has been poisoning our mindstream for millennia. Spinning half truths into rigid dogma and encouraging us and our ancestors to commit various atrocities.

In preparation of a war, you can claim the opponent's territories on the global stage. Then, to declare war, you have to choose an exterior cassus belli - what other global actors will be told about this conflict - the "just cause".

You can claim that your "holy" traditions will liberate the pagan world, that you're bringing freedom to their people tired of the tyrant's yoke, that your ethnic minorities are oppressed and you're just trying to protect them, that your ancestral lands are being occupied, that you have the mandate of heaven for the unification of the world.
Each cassus belli limits the demands that you can have after the war.

You also have to choose an interior propaganda - what you tell your own people. You can tell them that the other nation's soldiers are barbarians, cannibals, that they have infiltrated our government and are running our nation from the shadows, that their traditions are a threat to our freedoms or.. you can be honest and just explain that we need more territory.

The more hatred your lies inspire, the bigger the military bonus. However, a lie will have a negative effect on your nation's production of ideas and other karmic effects. Millions of minds repeating a lie for ages: that's not profitable. Or is it ?

We try to incorporate the idea of karma into wars. A nation that attacks will get years added to the time needed for its souls to pass through each independent evolutionary stage. This means that fewer new ideas will appear in your state due to the emotional traumas caused in the conflict.

We have 3 evolutionary stages:
1. Common souls - only interested in themselves and only contribute ideas to the day-to-day category.
2. Noble souls – which are common souls that have gone through multiple experiences and have now turned their minds towards science, community and government. They now contribute ideas to the governance category too.
3. Ascetics – after noble souls give all they can to the scientific fields and community, they turn their minds to more, to trasncendence. And then uncover the spiritual methods that free us all.

Once their interior work is completed ascetics are freed and leave our world. 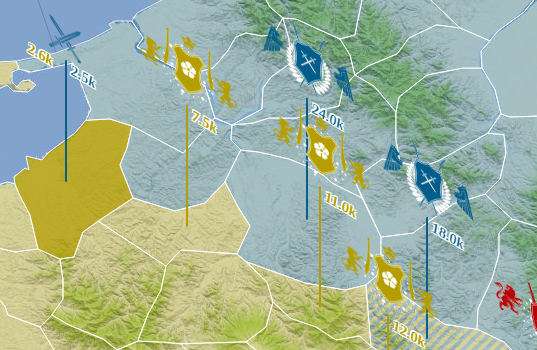 You can limit incarnations in the astral plane tab. You can forbid beings ridden with vices and desires from being born into ruling families. This will improve the way in which the nation is ran but will decrease the common soul's evolution speed because you're denying them leadership experiences. But imagine someone only being interested in themselves being given the keys to the world.. They might use the entire national treasury for their own personal gain while the many suffer. Is this a risk you are willing to take ?

You can also allow Artificial Intelligence incarnations.
This will essentially permit an A.I. to incarnate as one of your citizens and perform tasks or serve purposes that most souls would outright refuse. Endless possibilities.

You can fly a banner with custom heraldic elements that are not found in Europe in the Middle Ages.

You can also build new wonders - enough with the eiffel tower.

Every simulation includes continents that have no microtransactions. 100% free. However, their total capacity is limited.

The game simulates the effect that large, monocultural, agrarian societies have had on the environment.
Just as some ancient civilizations had fallen on Terra due to bad soil management, your state will be at risk if you ignore the issue.

In a nutshell, these are the key ideas and features we explore in Minds of Nations.