The Man Came Around

Committed and unforgiving, The Man Came Around is a survival game filled with tough choices in a time of crisis.
A political fable about exile, hardships and the collapse of democracy.

Occida, one of the most powerful nation of the world, is shaken by mass protests met by brutal repression. As the fight between The Many -an activist organisation- and the government intensifies, the country is rapidly falling into dictatorship.

Your only hope is to cross the Northern Border, a heavily guarded fence lost in the middle of the mountains.

You’ll face grave dangers during your trip, between the deadly elements and the corrupt cops. Manage your scarce resources, take tough decisions and make the best of your group abilities to escape this lethal maze.

But remember: sometimes staying alive is not the same as doing the right thing… Will you sacrifice your principles in order to survive?

Political fable: The story explores how a democratic system can fall, ruined by special interests. And asks the crucial question: How could it happen?

Moral Choices: Sacrificing a member, making shady deals or letting innocents die in order to survive ... Those choices will impact the story.

Group Survival: Permadeath for the characters! It’s up to you to finish the game with five or only one survivor.

Trauma System: Stress and guilt will impact your characters’ psyche.

Interactive Narration: Let your choices change the story. Replay to discover all possibilities. 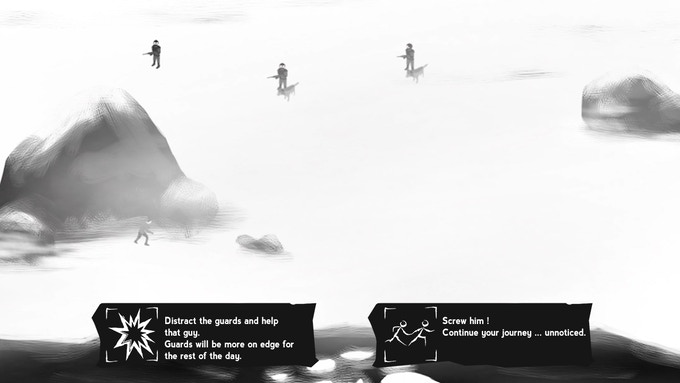