SLAYERS FOR HIRE
Developer
Meta Games
Publisher
Meta Games
SLAYERS FOR HIRE® is a free-to-play indie platform fighter with an emphasis on speed, precision, and creative characters. If you want something fresh to play with your friends, look no further. Playable online or locally with 2-16 players.
All Reviews:
Very Positive (117) - 94% of the 117 user reviews for this game are positive.
Release Date:
Developer:
Meta Games
Publisher:
Meta Games
Tags
Popular user-defined tags for this product:
Action Indie Early Access Fighting 2D Fighter Free to Play Competitive
+
Reviews
All Reviews:
Very Positive (94% of 117) All Time

“Early Access represents a way for players to experience SLAYERS FOR HIRE® early, while also providing much needed support in our most crucial period of development. This enables us to not only create a better game, but allows you to support and give feedback while the game is at its most pliable. It's a win-win!

Once we develop the game further with more characters, stages, game modes, content, etc. then we'll leave Early Access. We've begun our transition to free-to-play with our Founder's Pack, but at 1.0 we plan to fully support ourselves with cosmetics sales (no pay to win, no paid lootboxes).

Thanks so much to everyone who supports us to make SLAYERS FOR HIRE® the best game it can be!”

Incidentally, we plan to grant Founder's Pack players full access to all characters - both now and forever.

In the current version, we only have three characters playable of the planned six for the 1.0 launch. The full version will have more characters, more stages, more content, more features, more polish. Just more, more, more.”

“Discord! We've got a rockin' server where we hang out with the community to chat and get feedback daily. It's where you'll find our most recent and detailed updates, and where you can talk to us about them. It's been a ton of fun seeing our community grow from 1 person (thanks mom!) to a few thousand, and I'm so grateful for all the support!!

SLAYERS FOR HIRE® is a free-to-play indie platform fighter with an emphasis on speed, precision, and creative characters.

This is a fighting game that rewards creativity more than any other. Whether you're goofing off with friends or pushing your skills to the limit, you can expect an adrenaline-filled experience every time you play. Play online (with rollback netcode!) with up to 16 players or locally versus up to 6 players or AI. 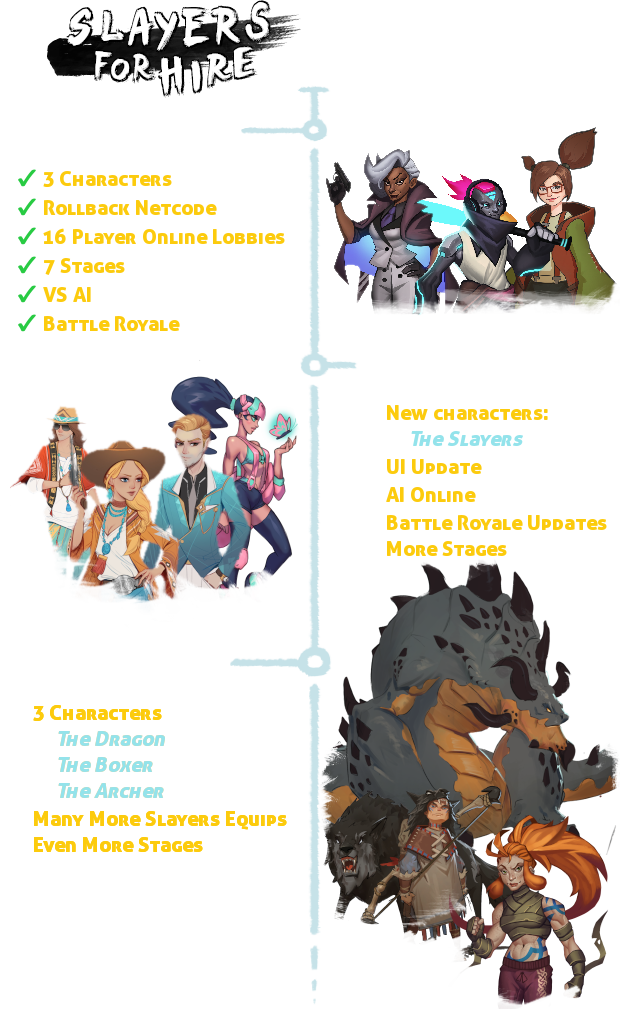