“Now in the later stages of development and aiming for a Halloween 2021 release.”

“Planned features that will grace the game once it's finished:
”

“As of the Ruby update players can experience the entirety of the
, there may be a few bugs and/or content that
remains to be polished but should be finalized by the first release.

If you do not wish to spoil the story, there is a test room for you to try out many of
the game's mechanics, as well as getting to try every single recruitable and fighting
every foe in the game in a battle test room.

You are encouraged to try completing the main quest as it is fully playable, I'd love to hear your feedback on it.

Select [] at launch to enter the developer test room, from there go down the left corridor moving south and there will be teleports to the level select room and battle simulation.

For a full list of upcoming features refer to the "About this game" section.”

“Early Access is considerably discounted from the official release, once Phantasmata has gone gold price will incrementally raise as we add new content and features.

Meaning now is the best time to snag Phantasmata for a discounted price!”

“Early access players get to mold the game through their constructive feedback.

Join the Phantasmata community through the official Discord channel!
https://discord.gg/w3CGduU” 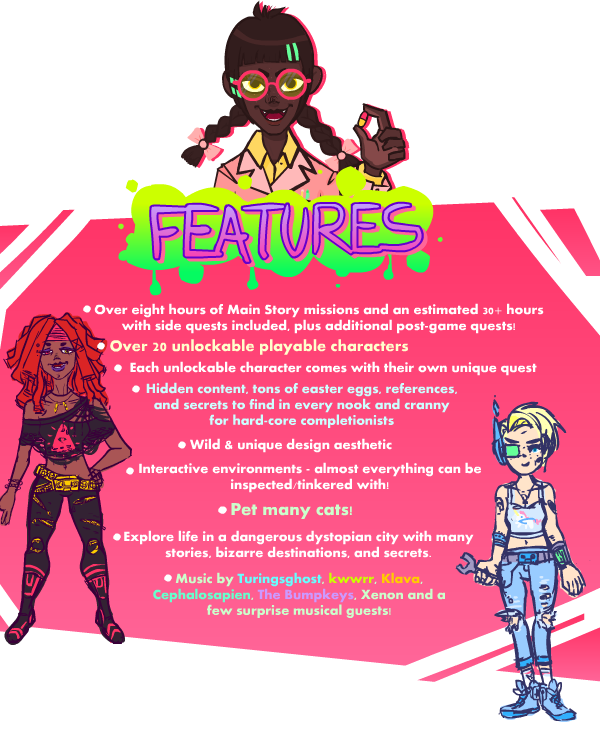 Most of Phantasmata's protagonists if not all deal with mental illnesses of varying degrees and kinds, you have the option to manage your psyche with medication and other methods.

The player has the option to purchase and consume recreational drugs as well as prescription and over-the-counter drugs.

There may be suggestions of self-harm & suicide.

There is casual nudity and some of the monsters contain grotesque depictions of sexual organs. There is a strip club in the game (non-nude but revealing clothing) and there are no visual depictions of coitus.