“We're in the process of moving from beta to final build and want the visual novel community on Steam to provide feedback on elements of the story and game mechanics. We also want to show development is moving forward after having the game in development for 4+ years.”

“It will have more voice acting and extra scenes that enhance subplots and tie up loose ends. Additional background animations and any fixes suggested by the community will be incorporated into the full version.”

“The current version of the game features an extensive preview of what the final vision of the game is supposed to be like. Most features listed in the "About This" section are already implemented.”

“We plan to gradually raise the price as we reach closer to a full release.”

“Since this is Early Access and we want to start moving to a full release, we'll be taking on bugs that come up during this period from our players.

We will apply other polish work we missed that the community may find, such as editing text, using more appropriate sound effects, add more hints to difficult parts in the puzzle sections, concerns they have about game mechanics, and adjust story pacing from feedback from the community.

We will be looking for feedback in the community forums as well as any issues brought to our attention via social media and support tickets.”

“...it might just give [Zero Escape and Ace Attorney] a run for their money.”
RPGFan

“It works. It works really well. Exogenesis credits us with some perception. The artwork is impressive, and it boasts strong voice acting and some puzzles that are interestingly based on paying attention to what you’re told.”
Rock Paper Shotgun

Inspired by Zero Escape and Ace Attorney games, Exogenesis ~Perils of Rebirth~ is a massive epic ADVENTURE GAME/VISUAL NOVEL HYBRID which combines the point-and-click gameplay of adventure games with the heavy focus on storytelling found in visual novels.

The world has ended. From the ashes of war, mankind struggles to survive under the tight grip of a mysterious organization known as Sanctus Ordo Illuminatus. Some are starting to rebel, thus creating a revolutionary force called God's People Army.

It's 2069 - Yudai Sayashi’s ragtag group of treasure hunters, Durchhalten, faces tragedy. The greatest treasure of all - the "Golden Dream" - is within their reach. But Yu's sister Miho runs into a deadly trap and everything falls apart.

Two years later, Yu comes across a startling discovery. The mythical Noah’s Ark, borne of legend by those who believe the Old World can be restored, turns out to be real.

Yu learns about the existence of the Lazarus Protocol inside Noah's Ark – a system that can recreate anything from the past – and goes on a search for the Ark, believing Miho can be brought back to life.

Before setting out to find the Ark, however, Yu must reunite the now defunct Durchhalten. The group had disbanded after the tragic incident, and he wants everyone to be there when Miho opens her eyes once more. 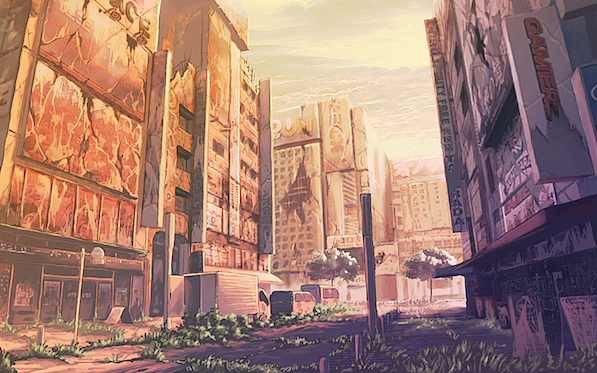