Prologue for a Vacant Kingdom

Play Prologue for a Vacant Kingdom 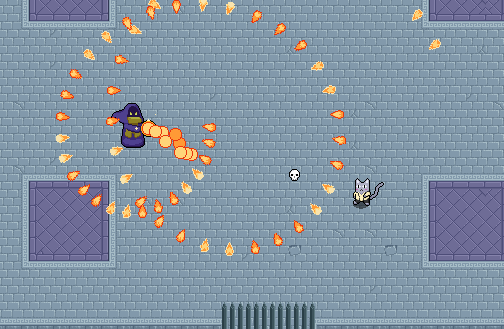 Vacant Kingdom is a bullet hell action-RPG for PC and Mac. Its combat takes inspiration from Japanese arcade shooters, but the story and world are structured like an action-RPG. Bosses will put your skills to the test, but you'll only have to defeat each one once.

In Vacant Kingdom you explore a whimsical yet desolate land and try to uncover the mystery of where its inhabitants went. On the way you'll meet a colourful cast of characters. Like a chef who only knows one recipe, a nefarious wizard who wields the dark power of obtuse riddles, and a robot who is programmed to teach the world about insects.

Prologue for a Vacant Kingdom is a slice of a larger game which will eventually be released as Farewell for a Vacant Kingdom. You can think of it as a demo designed to gather feedback so that the final game can be as great as possible. However, even though Prologue is a demo, it does contain a lot of content. Most players can expect to spend 2-3 hours completing it.