“Early Access allows us to build the game with the community, not simply for the community. What does the community respond to positively? What do you want more of? What needs more work? We can answer these questions in Early Access better than anywhere else.

BEFORE YOU BUY
The beginning of Early Access is our starting point. Initially, we will work mostly on ensuring a stable experience, but we do have new content and features coming your way.

Second Extinction is primarily intended to be played with others. It’s a squad-based coop shooter. While it’s certainly possible to go it alone, the game is much harder without friends. While we’re exploring all options and will balance the game throughout Early Access, we strongly encourage you to play as a team.”

“Good question! A lot of it comes down to your feedback. We want to make sure that Second Extinction offers a fun experience designed for years to come. Our focus is to build on the game with utmost care and a strong focus on quality. We don’t have an end date yet, but will provide regular updates and let you know as soon as we know.

Of course we have some goals that we intend to reach as developers. More content and features as well as a stable, fun long-term experience. Reaching that goal is what we want to use Early Access for.”

“We want the full version to reflect what our players expect from a dinosaur-killing co-op shooter game! While we have some ideas on what that would look like there are still a lot of unknowns that we will be testing out and getting input on. We’ll be ready for a full version when both us and our community say we are. Our current roadmap looks like this:

At Early Access Launch: 4 Heroes, 10 Weapons with 5 tiers of upgrade, 6 missions across 7 regions, including 12 side missions, contracts, cosmetics to unlock, and more!
In the future of the Early Access phase:

Full Release
Expect the full version of the game to be more robust, including the features that have been identified and requested from the community. We will also follow a more standard live-service offering, so a less frequent update schedule but more concentrated content releases. The community will still have an active voice in our development, but we may be a little slower in our responsiveness to incorporate feature and content suggestions - in our ideal version of the game, changes have far-reaching implications on all the systems (which is a good thing) so we would need time to make sure everything works as intended.”

“The Early Access is a robustly featured base version of the game, including compelling fast-paced FPS combat, player progression and rewards and the unique War Effort. Early Access will allow the team to build on these foundations both by improving what already exists and by adding depth and breadth to these systems and types of content.

“A great benefit of Early Access is unique features like The War Effort that are player driven will get to be trialed in the wild in order for us to adapt and improve before final launch.

Our Early Access players are our frontline troops, heading into Boot Camp with us - and when the game launches fully, the experience will be ripe and ready for new raw recruits (who just might need some pointers from our war veterans by then, too).”

What People are Saying 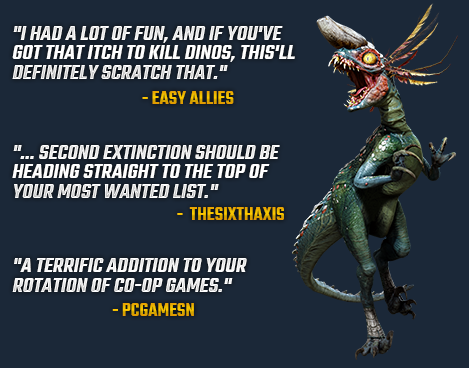 The goal is simple: Reclaim earth.
In Second Extinction you take on hordes of mutated dinosaurs with up to two friends. Solo players beware: Second Extinction is designed with squads in mind. Only the strong will survive.

The goal of Early Access is also simple: Work with our community to make the
best game possible.
We want to hear your feedback loud and clear, and we intend for our community
to be a vital part of the development process.
Even so, there’s plenty to get your teeth (and claws) into from day one: 5 heroes,
11 weapons (with 5 upgrade tiers each) and 6 missions - plus some special side quests - across multiple regions of our big map.

Our mantra is that players win battles, communities win wars. Nowhere is this
more true than our War Effort feature.
Each region of our big map has a unique threat level. This threat level can be
lowered if enough of our players are successful in their missions and activities. But the dinosaurs aren’t resting either, and they’ll focus their efforts where you aren’t.
Each week the community will see the fruits of their labours or feel the
consequence of their incompetence. Let the threat level get out of control and
you can expect an especially tough Emergence Event to be waiting for you.

By playing Second Extinction you’re not just picking up another co-op shooter.
You’re joining us on a journey as we shape the experience. Every piece of feedback and every mission you play matters. So what are you waiting for? The fight to reclaim earth starts here.

Second Extinction depicts high levels of violence in combat segments, with large amounts of blood and limbs getting ripped off the body of the enemies.