Rodolphe Wallace, a 30-year-old unemployed inventor, finds himself plunged into a crazy and incredible adventure with his two friends: Cyprien Karanoff, a neurotic neat-freak; and Luc Vega, a bipolar, impulsive geek with only four seconds of active memory.

To escape from the madhouse in which they've been locked up for a year, the three companions hide aboard a space shuttle that sends them into orbit around Earth, allowing them to avoid a nuclear apocalypse caused by Nathanael, a maniac who wanted to avenge his goat who died from human pollution.

Five years later, the shuttle automatically returns to the partially irradiated Earth and deposits the three madmen in a desert near a post-nuclear town called Ragoon City. And then the adventure really begins...

-Control three characters who have very different personalities: a pretentious, grumpy, unemployed inventor; a neurotic, germophobic chemist with tics; and a bipolar, impulsive geek with only four seconds of active memory.

-Solve balanced puzzles, neither too difficult nor too easy. Your notebook will help you keep track of your objectives.

-An easy-to-use interface lets you save the game anytime and configure the game options.

-Four chapters with at least six hours of gameplay, depending on your experience with point-and-click adventure games.

-Neat, cartoon-y graphics and a plot that will make you want to keep on playing.

-HD graphics and options for other resolutions. Play full screen or windowed.

-A humorous point-and-click adventure reminiscent of Day of the Tentacle and Monkey Island but with the French touch from Adipson Studio.

-Game available for Windows in French (default version) and English.

The game is configured for a default launch in French. Please launch the file winsetup.exe and choose from the drop-down menu of the 'Gameplay setting' dialog box, but you can select your language also in the game itself on its homepage by clicking on the flag of your language. 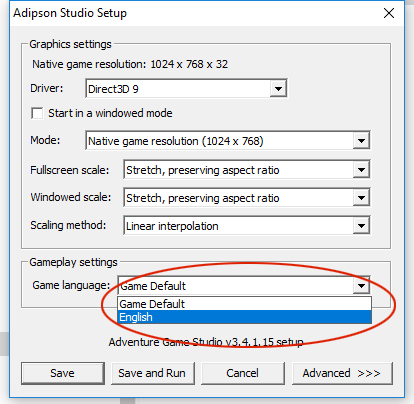