Beta 0.94: Patch Notes
Xenomarine - logophil
This update is mainly aimed at improving performance in some key areas, which should result in increased framerates and faster load times for most players.

Beta 0.91-0.92: Patch notes
Xenomarine - logophil
Apologies to those who bought or updated the game and tried to get past level 3 between 11pm on the 14th and 11am on the 15th (Pacific time), you would have been blocked by a message telling you this was the Demo version. This was due to a bug introduced in Beta 0.91, itself a hotfix for a minor problem with the Steam leaderboards. As of 11am Pacific Time on the 15th this bug has been fixed (but to be safe, check the version number on the splash screen and make sure you are not playing 0.91).

FIX: bug with leaderboard entries being made for zero kills/levels reached

It's not yet transitioning to full Steam release for three main reasons:

So if you'd like to help shape the final product please do use this opportunity to give feedback - the best place for this is the discussions section right here on the Steam community. 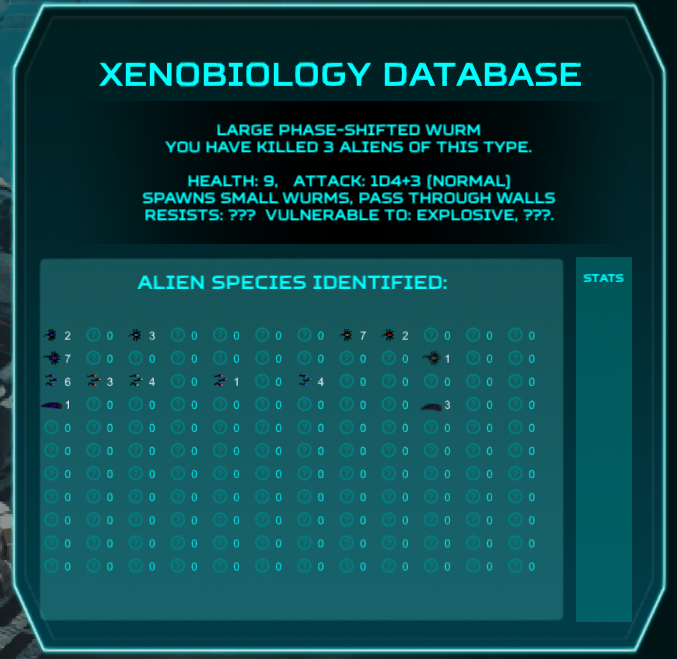 Xenomarine Beta includes improved highscore stats, Steam leaderboards and some significant changes requested by players, such as a 'bestiary' and the ability to continue 'adventure mode' games without restarting the level. Here's a full list of changes:

Alpha 5.2: Patch Notes
Xenomarine - logophil
This is a pretty significant patch: with the new armor types and alien tech in this release, Xenomarine is now complete with respect to equipment (weapons, armor, items), at least in terms of having all items originally planned (I may actually add one or two more things yet, but these will be a bonus rather than part of the original plan).

In addition this patch adds 7 new perks (special abilities gained through skill progression) to the earlier 5, including such things as auto-reload, and 'push back' abilities - as well as a perk that introduces 'critical hits' to the combat mechanics. There's also a major overhaul of the way knowledge of aliens is gained and used, including new log messages to make this part of the game more accessible to players.

Finally this patch brings a significant adjustment to the difficulty curve that should be directly noticeable by players. While Xenomarine is still very much intended to be a 'hard' and intensely tactical game, the aim of this balance adjustment is to make the ability to get past levels 3-6 less dependent on lucky equipment finds. Instead you should experience a more gradual increase in difficulty as levels progress. However I would welcome further feedback from players on the new difficulty curve!

Overall Xenomarine is now close to being ready to ship: look out for the first 'Beta' release in the coming weeks! 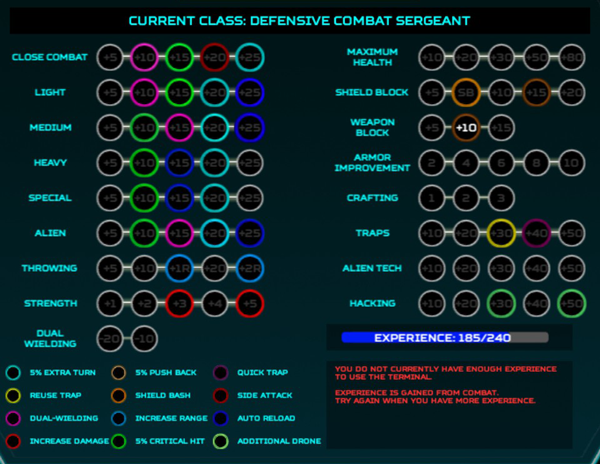 NEW: 7 new perks to be gained through skill progression

Alpha 5: Patch notes
Xenomarine - logophil
It's a pretty big one! The 'Drones and Turrets' release add gun turrets to the game for the first time. Turrets can be either neutral or hostile and can be hacked in the same way as drones, and basic ones can also be found as placeable inventory items. This release also finally adds player move animation to the game! More details below.

Alpha 5: Patch notes
Xenomarine - logophil
It's a pretty big one! The 'Drones and Turrets' release add gun turrets to the game for the first time. Turrets can be either neutral or hostile and can be hacked in the same way as drones, and basic ones can also be found as placeable inventory items. This release also finally adds player move animation to the game! More details below.

MOD: when right-clicking usable to add to quickslot last slot is selected by default rather than first
NEW: can now use 'enter' key from new game panel to start new game
NEW: improved size, look and location of inventory contextual menu
FIX: some annoyances relating to selection of inventory items