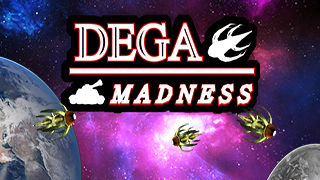 Sometime in the future, a universal threat called the 'dega' have appeared in earth's orbit. Earth has called upon 15 of the galaxies best known heroes, stemming from planets light years away, and even from earth, to finally stop this dega madness.

The goal of Dega Madness is to move your vehicle from the start of an orbital platform to the end of it without getting hit by any roaming dega's. But it's not that straightforward. Each vehicle comes equipped with it's own ability to help you get to the end, which you can use one time per vehicle. If you get hit, you'll be sent back to the start of the platform with a new vehicle, and can use your ability once again. As the stages progress, more Dega's show up, and your vehicle gets bigger/slower. So as you go on, it gets progressively more difficult this way. Luckily, if you're a skillful player, bonus lives will be rewarded by completing each level without dying.

There's also a co-op mode as well, where you can either work together to try and beat it, or face off against each other to see who can get to the end first. You're going to be sharing lives, so if your second player isn't as good, you'll have to pick up the slack!