“Despite its age, Record of Lodoss War Online is a pretty decent, anime dungeon-crawling MMORPG with a nice background story, great anime-like graphics, and a hack-and-slash gameplay that is quite entertaining albeit a bit repetitive.”
MMOSquare

“Based on the Japanese series of manga and RPG games by the same name, Record of Lodoss War Online is an anime high-fantasy MMO”
MMORPG

Lodoss War Online is a 2D MMORPG launched in April 2017, a new RPG title developed game of L&K Logic Korea that had a remarkable success in both Korea and Japan since 2015. It is based on Record of Lodoss War—a legendary fantasy novel in Japan, set in the cursed land of Lodoss, which recounts the adventures and rise and fall of heroes. It keeps you entertained by not only fully recreating heroes in the original story but introducing fascinating stories of new ones to the game. 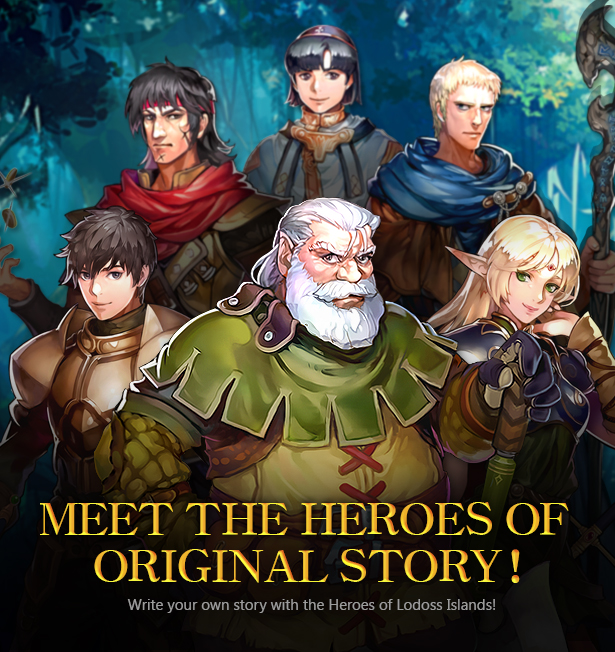 By becoming an adventurer in the world of Lodoss Islands, players can experience authentic storyline co-directed Mizno Ryo, the author of the original book “Record of Lodoss War”, while also immersing into a completely new story that would capture your interest instantly. 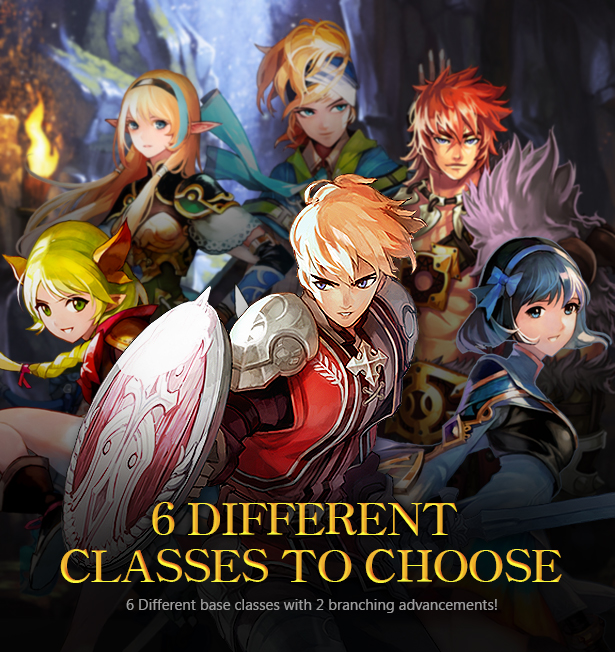 Each class possesses their own unique active, passive, and reaction skill sets which are interchangeable, providing many different skill customizing. Combined with 1000+ magnificent items that provide different options, players can create their own unique character that suits their playstyle. 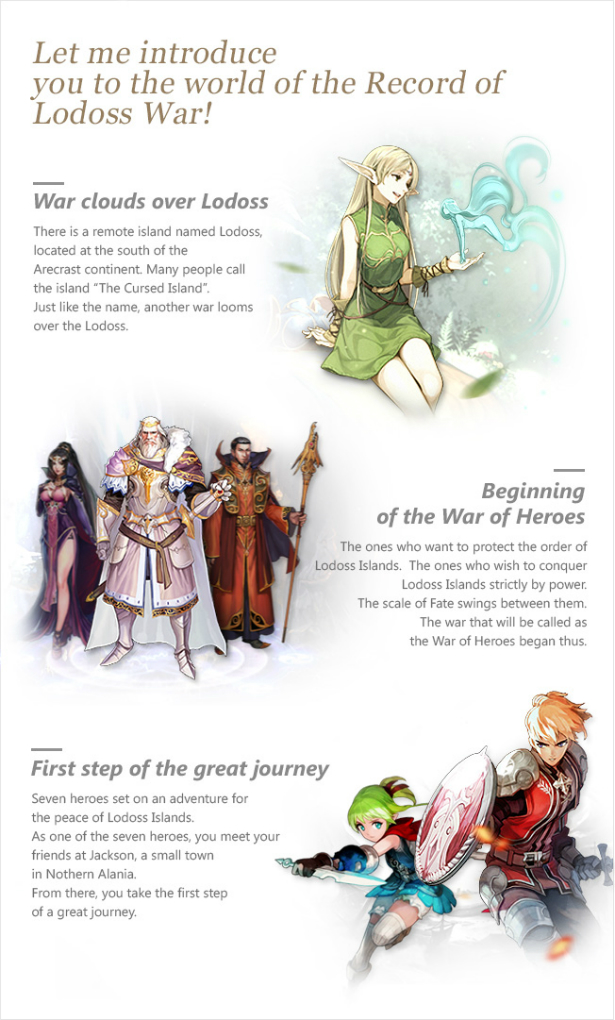 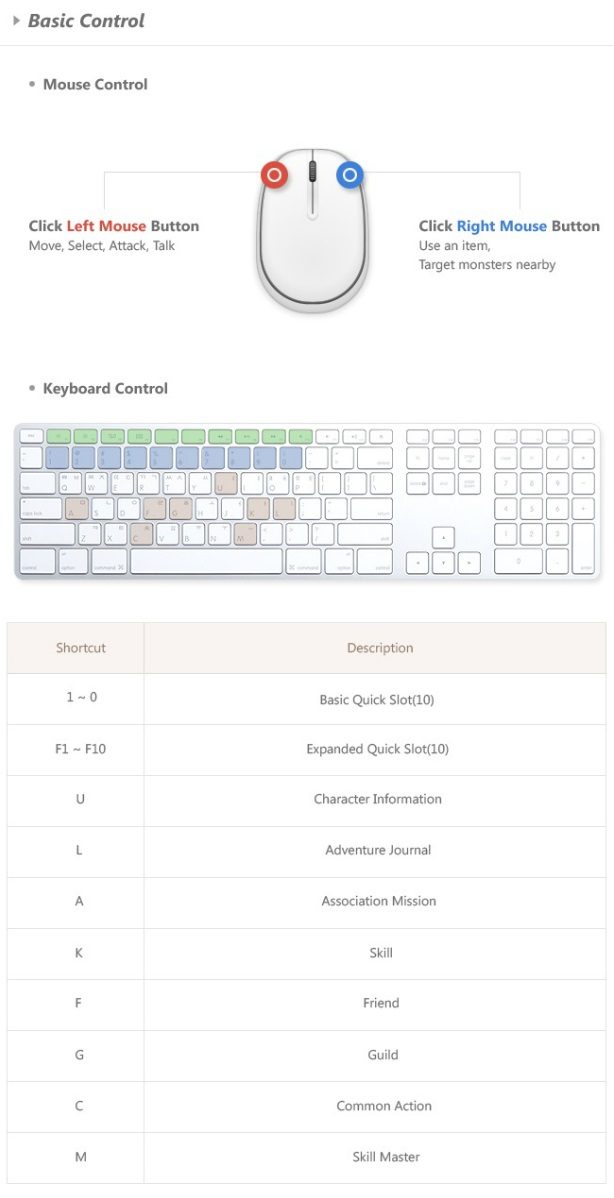 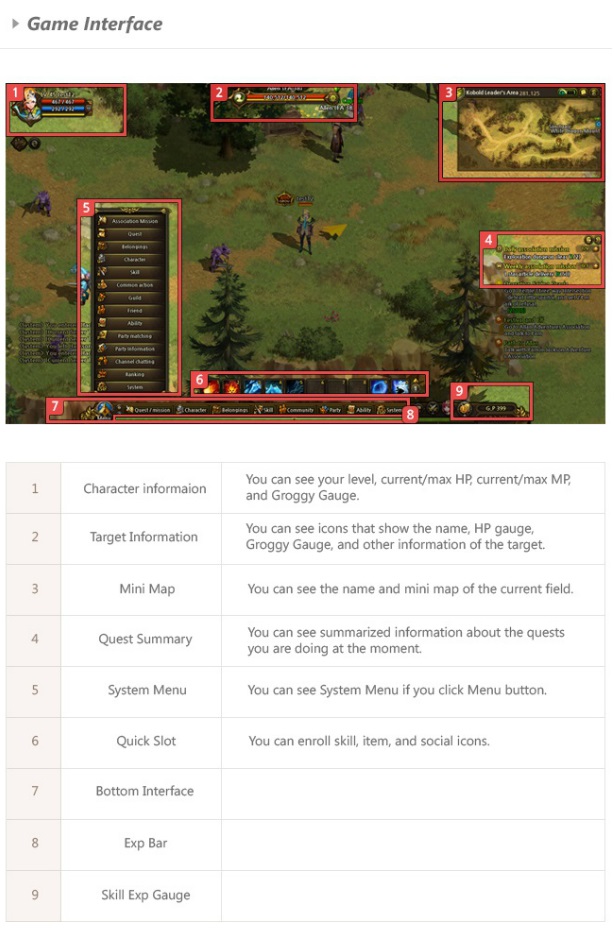 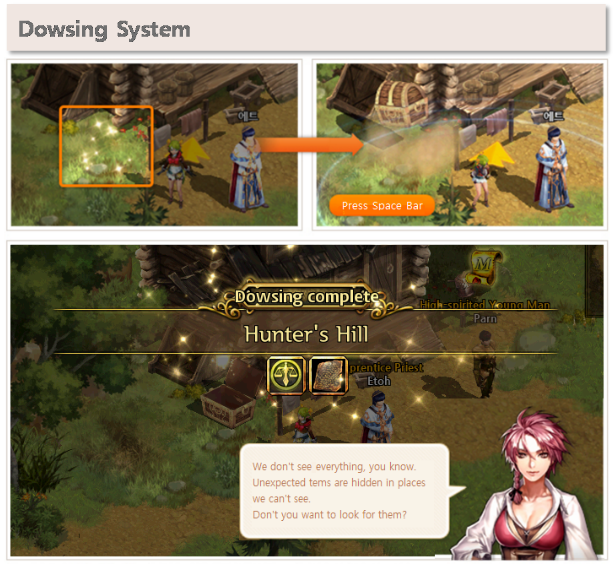 Dowsing feature allows players to find rewards when activated in specific areas. One can acquire items necessary for the game or quests. Dowsing is activated by pressing the 'Space Bar' in hunting grounds. If a reward is hidden within the area, a treasure chest pops up for the players to claim.

Groggy state occurs when the Fierce guage (Yellow bar) drops to 0 after being attacked by normal attacks or skills. Both players and monsters can become groggy. Some skills cause serious damage, or have reduced cooldown against groggy targets, having a great effect against them. 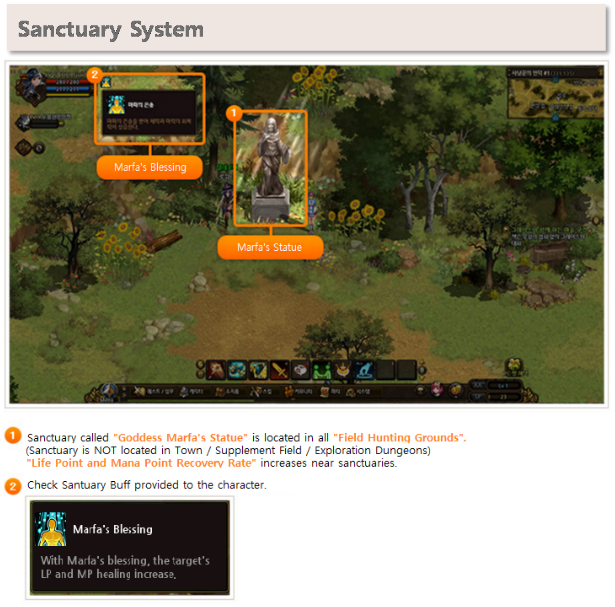 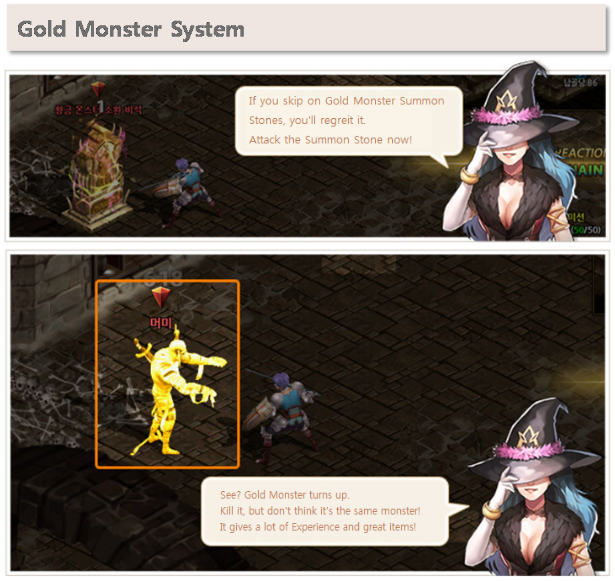 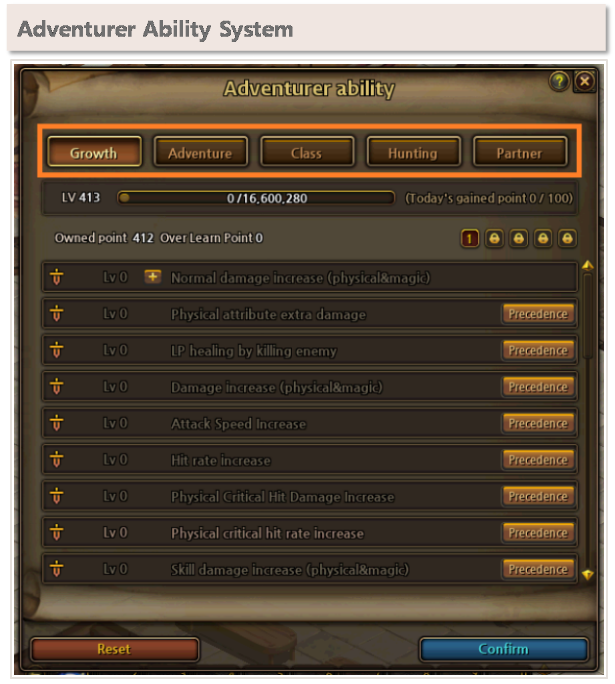 Adventurer Ability allows players to plan how they want to develop their character. There are 5 abilities. Growth and Class abilities help players in combat. Adventure abilities help exploring the world of Lodoss. Hunting abilities, only obtainable from Labyrinths, helps against a specifit type of monsters. Partner abilities can be obtained by completing NPC Trust quests. 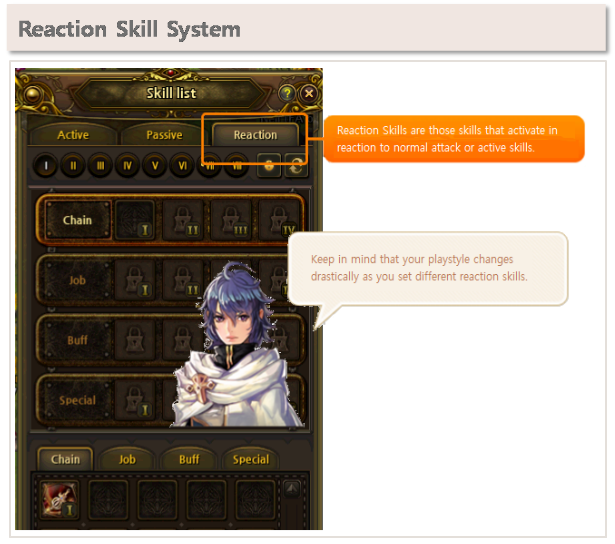 There are 2 types of Reaction Skills available for players. "Chain Reaction", and "Job Reaction". These skills are activated automatically when certain conditions are met. As players level up, they unlock higher tier reaction skills, which allows them to establish their own combat style according to the choice of reactions skills as their character advances. 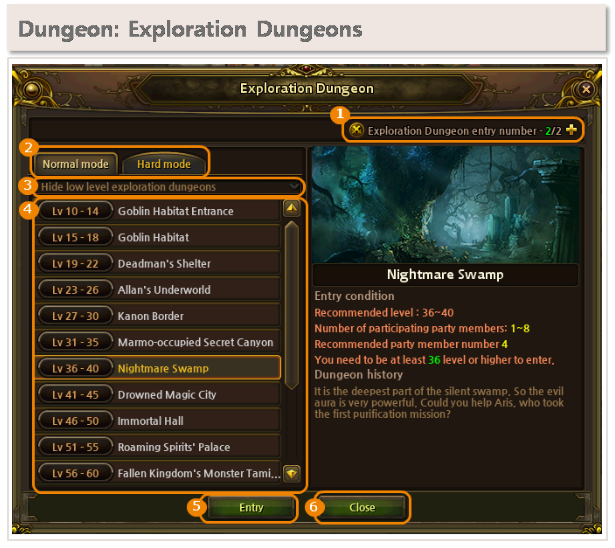 Exploration Dungeons are special dungeons with daily limit of entry. Players can make a paryth, choose the level of difficulty, then go hunting in difficult dungeons. Each dungeon has their own quests you can accept when players enter. Exploration Dungeons are completed after completing these quests, providing large amount of EXP. After completing the dungeon, players are teleported back to town after 300 seconds. 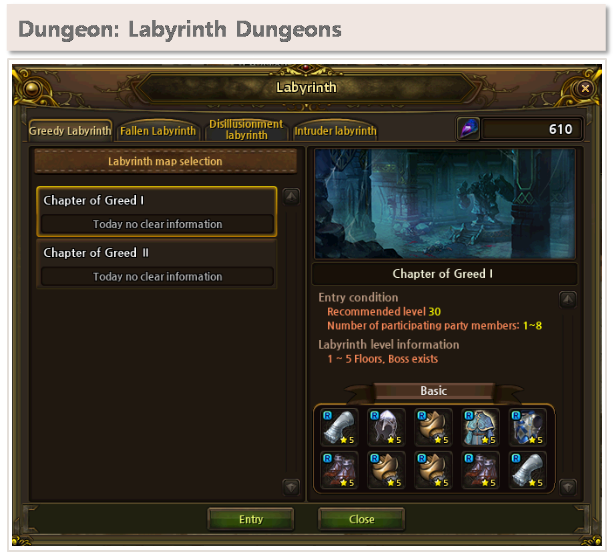 Labyrinth Dungeons are for players higher than level 30. After entering, players clear one chapter after another, moving up to next floor. Each Labyrinths are made of different number of floors to be cleared. After clearing Labyrinth Dungeon, players can gain "Labyrinth Random Box", which contains Labyrinth EX items. These items have Labyrinth Options that enhances skill effect greatly, allowing further customization of player combat style. 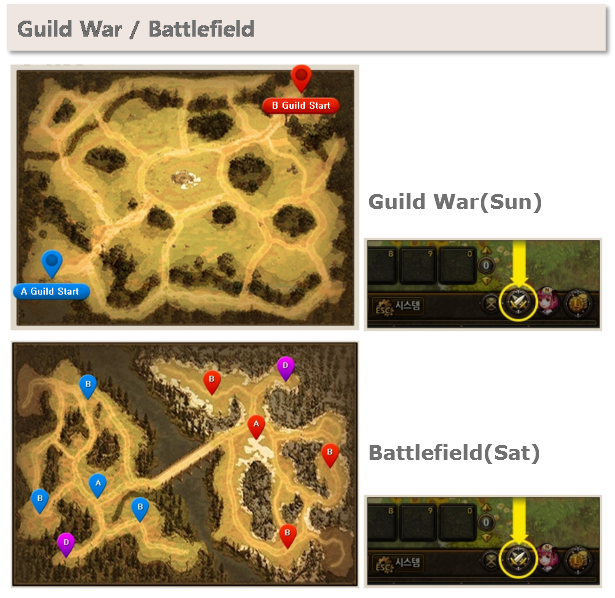 Guild War takes place on Sundays. Guild Masters need to apply within a preset time period, then attending guilds battle out for Honor Scores, with top ranking guilds registered in Hall of Fame.

Battlefield opens on Saturdays. Players over 30 levels can participate, battling monsters and players to gain points for your side. There are 3 stages for the field as points accumulate, and all stages end when the final boss is eliminated. The side with higher score claims victory. 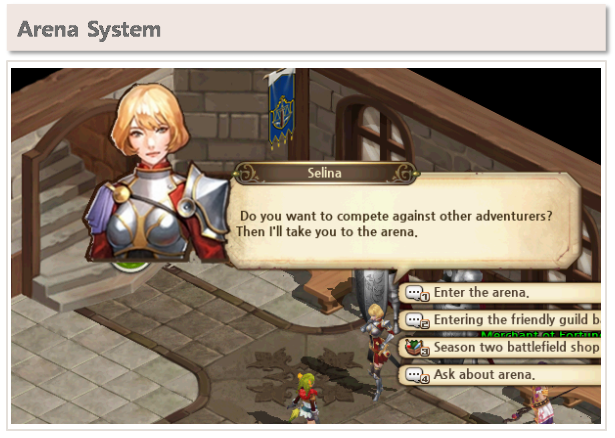 Players can test each other's skills by duelling in the Arena. Character HP, Damage, Recovery are automatically adjusted according to duelling rules. There are no limitations as to which equipment participants can use, so prove yourself to be the best of all.