We Are Terror: The First Days

We Are Terror: The First Days
Developer
Kuzcopia
Publisher
HDamas
Four chapters, each drawing closer to the great worldwide war between Man and Myth. Each allowing you to experience how the war begins! A reading adventure where you make choices to help the protagonist of each chapter survive, but at the same time, the wrong choices offer their own rewards.
All Reviews:
Mixed (21) - 57% of the 21 user reviews for this game are positive.
Release Date:
Developer:
Kuzcopia
Publisher:
HDamas
Tags
Popular user-defined tags for this product:
Free to Play Text-Based
+
Reviews
All Reviews:
Mixed (57% of 21) All Time

Requires agreement to a 3rd-party EULA
We Are Terror: The First Days EULA
Languages:
English
Ratings

View
all 25
Title: We Are Terror: The First Days
Genre: Free to Play

Play We Are Terror: The First Days 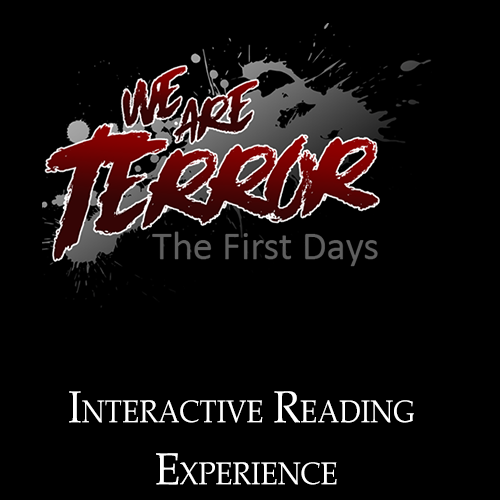 A war is coming between Man and Myth. A war which will rage across the world and wreak terrible devastation. Witness how it starts!

This is a reading adventure where you make choices to help the protagonist of each chapter survive to the end, so they can live on to impact the coming war. At the same time, the wrong choices offer their own rewards as they lead you down paths that explore more of the characters and the lore. No choice leads to a plot-line that is irrelevant and inconsequential, which means that though there are wrong choices, there are no bad ones.

We Are Terror: First Days is the intellectual property of Hugo Damas, aka Kuzcopia on Steam. All characters, lore, and story developments are entirely fictional and do not factually represent any real world entities or events. Any resemblance is purely coincidental.
In terms of assets used, everything has been built from the ground up by Hugo Damas, aka Kuzcopia on Steam, at the exception of audio assets which have been used within the legal rights as declared by the producers. In terms of fulfilling attribution:
Sci Fi, Tomorrow, Better Days, Deep Blue. All by Bensound.com.
Fibonacci by Jahzzar.
Realness, Crying Earth, Changing, Oecumene Sleeps. All by Kai Engel.
Beneath Dark Clouds by The Pangolins.