This content requires the base game Ancient Frontier on Steam in order to play.

This content requires the base game Ancient Frontier on Steam in order to play.

Greetings Commanders! We are pleased to announce that our second DLC, Quests and Events, is now live and will automatically update everyone's game. This DLC is completely FREE as a continued thank you to all of our old and new fans. This DLC introduces a host of changes, most notably adding a Quest system and random Events. Read on for the full change log.

These are assignments and contracts that you can complete for rewards. There are ten different categories of quests that each can reward you for taking specific actions within the game.

How do I get Quests?

Quests are automatically awarded after the completion of most missions. After completing a mission and returning to the ship management screen, one of the menu buttons will display "New Quest!" if you have been assigned a new quest. 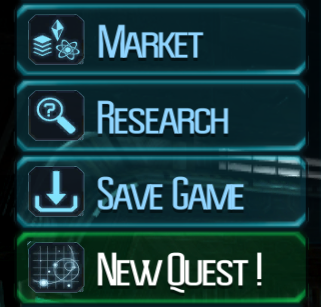 You can only have three quests at a time, so if your quest log is already full you won't be awarded with any new quests until you have room. Quests can be manually deleted from your log if you want to make room for new contracts. Completed quests will also be removed from your quest log as they are finished.

A new 'Quests' button has been added to the ship management areas of the game. The quest log will track what quests you currently have, and what progress, if any, you have made towards completing the quest.

Random events will appear after completing a mission at certain points throughout the game. Each event will describe a situation, and present you with three options of actions you can take.

Events can have positive or negative effects depending on your choices, so choose carefully. There are over 50 different events that you will be able to encounter so no two play-throughs of a campaign will be the same.

We continue to listen to your feedback. Based on what you have told us this DLC also comes with a series of quality of life improvements. Hopefully these will continue to make the game more accessible to players.

Missions will now display what enemies you will be facing as well as their estimated difficulty. 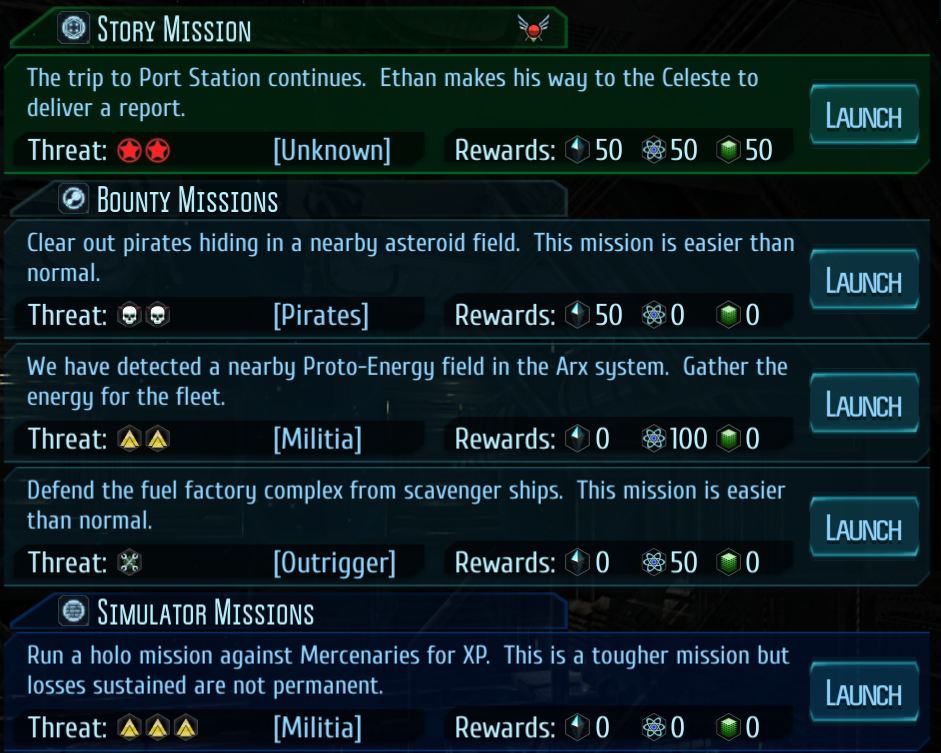 As we have continued to differentiate the different factions with ships, gear and crew it now makes more of a difference to know which faction you will be facing. Previously players had to mostly guess on the difficulty of a mission by looking at the rewards offered or through trial and error experience. We believe this change will help all commanders make more informed choices about which missions to undertake.

This is a pretty simple change that was a long time coming. When the game was originally designed the only option was to Autosave, where progress was always tracked. During development the system menu was removed as an unnecessary extra click.

With the introduction of manual saving, the lack of a system menu became a problem. Players could accidentally lose their progress by exiting to the main menu with one click. The system menu has been added to address this. It also allows you to customize the options settings at all points in the game. While this is a relatively standard addition, we hope this will help your experience.

Another piece of feedback that we got is that it could be difficult to tell the backup saves apart from each other. To help differentiate the visual look of saves that are at different points in the game, we have added images to the save files that represent how far in the story campaign you have progressed.

We added sound effects to a number of actions in the game (leveling up, for instance).

That is all of the changes included with this DLC. Old save games should continue to work, and all of the new options will be available. This is, at least for now, our last planned free DLC. We hope you enjoy the new content, and if you haven't already please leave us a review.

Thank you for playing our games!