“Lost Flame is a big project with lots of interactions and unpredictability. The game is mostly developed by myself in my spare time, so I would like the community to help with ironing of all the elements and systems to make Lost Flame a better game. Also I enjoy interaction with players and getting feedback is something I look forward to.”

“I plan to finish the 1.0 version somewhere around Q3 2020. Most probably I will continue providing updates even after that (just like I did with my previous roguelike platformer Madness of Little Emma - regular, monthly big updates for almost a year after 1.0 release).”

“Current version of the game has the majority of the main locations implemented (5 bigger locations and 6 smaller 1-map locations). Full version will have at least 2 more big locations and at least 1 more small location. Other than that I plan to implement a number of optional side locations and other ways to make each gameplay more varied.
Current version focuses on the gameplay, so the story elements will be much more fleshed out, there will be more NPCs, more dialogs, more ways to learn about the story. It will still be optional, listening to NPCs and reading stuff will be barely required to complete the game at all.
Full version will also feature a number of alternate endings, current version has only one.”

“Current version is definitely playable and has something like 20-30 hours of gameplay. Lost Flame has most crucial systems implemented, majority of sound effects and music for the currently implemented content is here. The game is linear in progression right now (no optional/side areas), it has around 80 monster types (most are quite unique) and around 80 unique item types (not including multiple types of the same item iron short sword/steel short sword/etc).”

“I don't plan to change the price at the end of Early Access. However this might change depending on, among other factors, the amount of content added in EA.”

“I plan to do regular weekly updates on the beta branch + biweekly or monthly stable updates. I will engage the community on Steam forums, in the in-game chat, on twitter and on the Lost Flame subreddit.”

Lost Flame is a modern roguelike game featuring unique and challenging turn-based combat. Explore the ruined kingdom of Hiraeth, fight against legendary warriors of the past and discover the reasons of the cataclysm.

The game takes lots of inspiration from classical roguelikes and includes stuff such as turn-based, permadeath, lots of procedural content.

There is a number of features which are something new in the genre, the most important one being a unique take on the turn based combat.
Melee combat focuses a lot on positioning and movement, it's not the typical bump into enemy until it dies.

Dodging attacks
Most of the enemy attacks are slow and you can usually dodge them by simply walking away:

It's simple at first area or two, but gets more difficult very quickly! 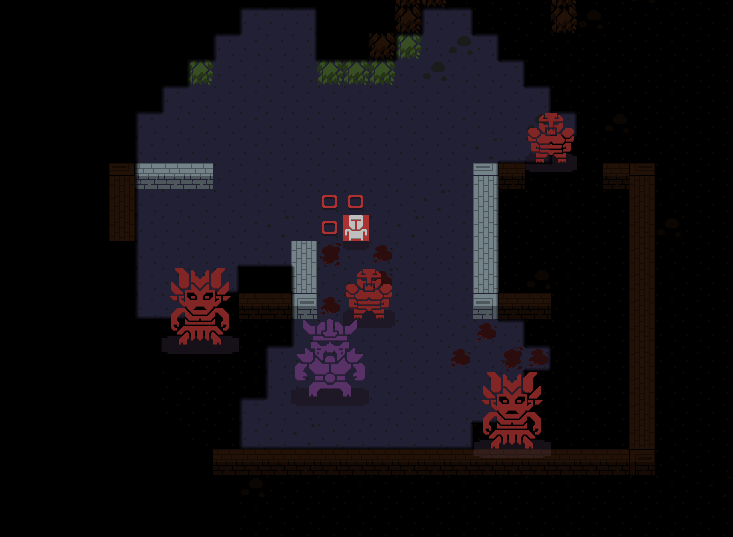 Most of the enemies have some unique traits or abilities and you cannot just apply the same approach to everything you meet.

Different weapons
Depending on which weapon you carry, you have access to, usually, 3 or 4 different special attacks.
For example

with long sword you can slash 3 grid tiles in one turn:

There are also other weapon types, such as spears, greatswords, all kind of axes and maces and a few more. Each with their own set of attacks.
Some unique weapons have completely new, unique attack types.

Each type of weapon requires a different strategy in combat, for example with short swords you are extremely mobile and can land quick hits on single targets, while dodging enemy strikes, with big weapons such as great axes or halberds, you usually want to position well and attack multiple enemies at once, because your attacks, while powerful, are slow.

Customization of character builds
Your character is completely defined by the items he carries.

You can empower your weapons by selecting which rings you want to wear, their effects are unique and usually it's not obvious which ring will suit best for your current build, below are a few ring types you can find:

Right now there 60 ring types possible to be found. Your character has 4 ring fingers.

There are multiple magical item enchants (prefixes and suffixes), for example:

Another layer of customization are scrolls of enchant items. They are quite plentiful and you can use them almost on any non-consumable item - you can enchant weapons, armor, but also rings, wands and other usable magical items. What you will want to enchant depends on you and there are no clear-cut correct answers here.