Sandbox Showdown is a physics based brawler where you choose an Archetype Hero and match them against Enemy Types from different genres, including Sci-Fi, Fantasy, Modern and Ancient.
All Reviews:
Mixed (14) - 57% of the 14 user reviews for this game are positive.
Release Date:
Developer:
Fistfang
Publisher:
Fistfang
Tags
Popular user-defined tags for this product:
Action Casual Indie Early Access Funny Sandbox
+

“While it's a very silly game, it's also a solemn attempt at a combat game and I hope it comes through. Although I've been working on it for a year, I'd like people to experience Sandbox Showdown and really have fun with what there already is to offer. Being an Independant Developer, I'd like to hear out the players and see what they enjoy about it, what could add to the experience, and what Heroes or Enemy Types they'd like to see. Early Access also will allow me to introduce Sandbox Showdown to public and allow others to participate in the development. I have big dreams for this game and I hope a public setting will help it come to full development.”

“I'd like to add additional Hero Types and Enemy Types, along with fully customizable level options. Although most of the features are in place, I will fine tune the process for players and allow more ease of use.

There is currently a leveling system for each individual Hero, allowing them to buy more powerful perks in the in-game shop, and I'd like to expand this leveling system to include a lot more rewards.

Finally, although a small amount of spoken voice-lines are in the game, I'd like to have each hero have full voice-over work, completed by me and my chosen associates, or if the opportunity arises, join with another company to finish the work. I think this will add a lot of fun to the game.”

“Sandbox Showdown has 9 Hero Types to choose from, and 9 Different Enemy Types to battle against, with selection of one of 4 Different Battlegrounds. I plan to add more enemies in the coming weeks. It is heavily physics based with very goofy gameplay, and still has many bugs. Heroes flail around and accidently lose their footing after a jump, and enemies stumble off of each other. The enemies use a bit of strategy, but the addition of unforeseen events (like catching fire, tripping over a dead enemy, or accidently stepping into a trap) makes the combat completely random and fun.”

“For the length of early access, besides temporary Sales or Discount periods, I'd like the price to remain the same. There will be additional content added during the development with no additional cost (towards the final product). Based on consumer interest, after Early Access more content may be added and the price may increase (No more than $5 additional).”

“Opening the public to the current development of Sandbox Showdown allows me to gauge their reaction on the Gameplay and address concerns they may have about its flaws. I plan on releasing this game in an enjoyable format while it's in Early Access, and will talk to the customers through the Community Groups and other proper channels. While not currently active, I plan my developer website (fistfang.com) to become active as I go through Early Release.”

Sandbox Showdown is a third-person physics based brawler, allowing you to match up Heroes with different play styles to enemies from different genres. Want to match sword-and-shield knights with a gun wielding soldier? A shuriken throwing Ninja against prehistoric Raptors? Or perhaps a spell-flinging wizard against intergalactic Space Marines? You can!

Sandbox Showdown is a third-person physics based brawler, allowing you to match up Heroes with different play styles to enemies from different genres. Want to match sword-and-shield knights with a gun wielding soldier? A shuriken throwing Ninja against prehistoric Raptors? Or perhaps a spell-flinging wizard against intergalactic Space Marines? You can!


- Pick one of 9 Heroes from different genres.
- Match them against several different Enemy Types, including Knights, Space Marines, Zombies, Raptors, Wizards and More.
-Drivable vehicles from different eras, including Motorcycles, 4 Wheelers, Cars, Hover-Bikes, and more!
- As you level your Hero, greater traits are earned by your battle using the In-game store.

Each Hero has a different mix of abilities to match their genre, such as bashes, dodges, and defensive blocks.
Play as … 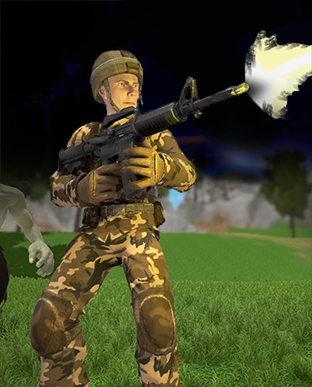 More updates will be released as I come closer to Launch. More Enemies, Vehicles, and definitely new Heroes ....