Sacred Stones
Developer
CFK Co., Ltd.
Publisher
CFK Co., Ltd.
Retro sidescrolling action and adventure greet you in Sacred Stones! The indie atmosphere is easy to immerse yourself in. Have a great time as you explore, run/jump & fight your way to victory. This game is perfect for both hardcore and casual fans alike seeking that nostalgic-indie fix!
All Reviews:
Positive (40) - 82% of the 40 user reviews for this game are positive.
Release Date:
Developer:
CFK Co., Ltd.
Publisher:
CFK Co., Ltd.
Tags
Popular user-defined tags for this product:
Indie Action Platformer Adventure Early Access Difficult Action-Adventure
+
Reviews
All Reviews:
Positive (82% of 40) All Time

“Love the pixel art presentation on this one.”
Notable Steam Release

“For me, the two magic words are "retro" and "platformer" and developer NoxBix is promising heaps of both in their new game Sacred Stones.”
toucharcade

It was finally released after a long development.

Looking for a hardcore platforming game with an emphasis on boss gameplay?
Then Sacred Stones is the perfect retro-platforming indie-game for you!
Sacred Stones brings a unique blend of retro-2D boss based gameplay. Explore the pixelized world, gathering items and weapons to help guide you to victory! Created by Sungjun Jo (NoxBix), Sacred Stones’s retro-feel comes from its appearance, its soundtrack (created by “.P”), and its gameplay; Sacred Stones is retro to the core. The sensitive input controls complement the linear & challenging gameplay. You will find yourself jumping & shooting and running & fighting your way to the end of the game as you learn uncover new weapons & areas across the map! 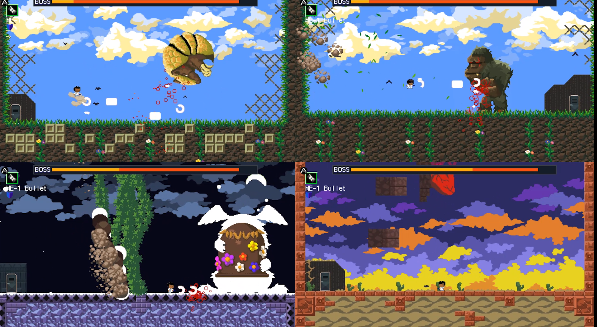 Hello, I'm NOXBIX's game director and developer Sungjun Jo.
Sacred Stones is a game I have been developing since I was a high school student.
I started with a high goal from the beginning, but I think I made it as I intended without compromising myself. It was a lot of work to make new things out of everything I developed. There were a lot of accidents during development, but I am very happy and proud to release this.

If you give us a lack of points or feedback while you play, we will actively try to develop it into a better game.
Thank you.

I have been impressed with Cave Story during my junior high school days and have developed the dream of game developers.
Can I make a game like this?
I used to ask myself the question of the rough and delicate Cave Story graphics. That's why you may feel the same atmosphere in my game.
If you compare Sacred Stones with the Cave Story, it's a small game, but I think it's my first step.
In the future, I will make a more unique and fun game with my own color.
Thank you for your support until then.
by Sungjun Jo (NOXBIX)