Freedom March: Rebel Leader
Developer
Gamenesis
Publisher
Gamenesis
Time has come. Start the revolution! Seems like the authorities forgot who they are. Your rebel soul can't take this anymore. Gather other people together and lead them to the freedom. Gain influence on your fellow-thinkers to successfully change the nation and win over the system!
All Reviews:
Mostly Negative (11) - 27% of the 11 user reviews for this game are positive.
Release Date:
Developer:
Gamenesis
Publisher:
Gamenesis
Tags
Popular user-defined tags for this product:
Political Sim Indie Casual 2D Politics Top-Down Political Action Strategy Minimalist
+
Reviews
All Reviews:
Mostly Negative (27% of 11) All Time

Specially for May Day we added a secret to the game! Beat the game on Normal or Hard difficulty and get a very valuable prize. It's not a joke! The prize is true. But we'll give it only the player who'll beat the game first. Hurry up! 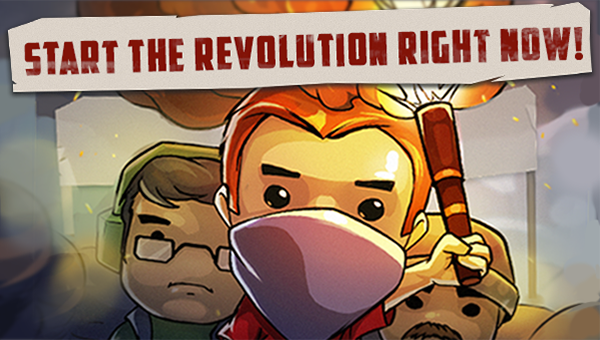 Time has come. Start the revolution with new logical game!

Seems like the authorities forgot who they are. Your rebel soul can't take this anymore. Show them that the citizens are the ones who have a real power in the country!
Gather other people together and lead them to the freedom. Gain influence on your fellow-thinkers to successfully change the nation and win over the system!

Freedom March: Rebel Leader is a thrilling combination of strategy elements and puzzle game. Here is what you have to do: walk around the city, gather the citizens in lines, then bring them to the main square, and - that's the hardest part of it - try to keep them all together on the way!

ONE FOR ALL, ALL FOR ONE

You can't do much if you fight alone, so you need allies. Convince people on the streets to go with you, and your power will grow. Go from one man to another to gather them in lines, form columns. When you're done, go to the city square to make a statement.

Earn respect of your followers, otherwise you won't be able to continue the fight and bring down the regime. The bigger the columns of angry citizens are, the sooner the people will loose their trust in authorities. The moment the number of your supporters in the central square reaches a critical mass, the hated regime will fall!

FIGHT FOR YOUR FUTURE

Your freedom is in your hands. Lead the revolution to put an end to the corrupted system and change your country!