“It’s an intriguing premise, especially when you keep reading and see the depths of bastardry you can get up to.”
Rock Paper Shotgun

My new cyberpunk interrogation game, "Silicon Dreams", is almost ready. Whether you loved Spinnortality or are a fan of cyberpunk in general, it could be right up your alley.

What is "Silicon Dreams"?

It's a cyberpunk interrogation sim, inspired by Blade Runner, where you interrogate "deviant" androids.

The twist? You're an android yourself, so you're a hair's breadth away from being decommissioned yourself!

What can you do?

Interrogate androids who may or may not be broken
Track their emotions: every line of dialogue can alter their emotional state, which in turn influences the interrogation
Manipulate their emotional state to break through their defences
Learn about their dreams, flaws and hopes
Betray their secrets to your creators, or choose careful lies to get them - and you - out alive? 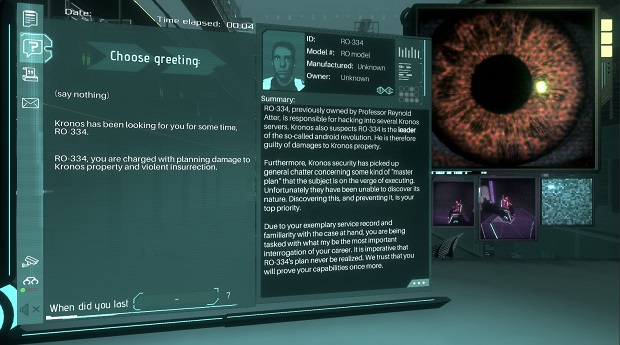 The game is really close to release; if you'd like to be notified when it launches, it would really help us out if you wishlisted it here!

Found a powerful corporation. Use it to market horrific products, control the media, cause riots, crash stock markets, topple governments and become immortal.

In this 8-20 hour turn-based management game, you will:

Spinnortality is set in a harrowing cyberpunk world where corporations are king. Nations have merged into massive, politically stagnant super-states. Some are so-called "democracies", some are dictatorships, and some are ultra-capitalist dystopias. These societies are in a state of flux; your company will determine their future.

As head of a global megacorp, your first priority is turning a profit. Before long, though, you'll be manipulating politics, deregulating industries, launching black ops to destabilise the globe and advancing shady corporate agendas.