This content requires the base game Field of Glory II on Steam in order to play.

This content requires the base game Field of Glory II on Steam in order to play.

Age of Belisarius expands Field of Glory II forwards from the fall of the Western Roman Empire in 476 AD to 600 AD, a period when the Eastern Roman (Byzantine) army transformed itself from a mainly infantry force to a cavalry army in response to the threats it faced.

You can be part of the flowering of the new “barbarian” kingdoms that replaced the Roman Empire in the west, and the conflict between them. You can play a major role in the resurgence of the Eastern Roman (Byzantine) Empire and the reconquest by the Emperor Justinian I’s generals, especially Belisarius and later Narses, of the Vandal kingdom of Africa, the Ostrogothic kingdom of Italy and part of the Visigothic kingdom of Spain.

You can take part in the almost continuous warfare between the Byzantines and the Sassanid Persians in the East, and the Sassanids’ own troubles with their eastern neighbours, the Hephthalites and the Göktürks. You can lead the Avars to conquer a mighty empire north of the Danube, and to threaten the very existence of the Byzantine Empire – or you can defend against them. 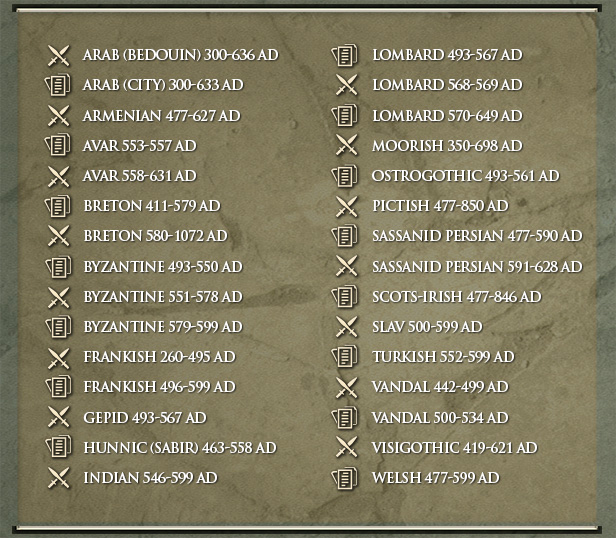 o Clovis I of the Franks

o Rise of the Avars