Oracle of Forgotten Testament is out on steam now! 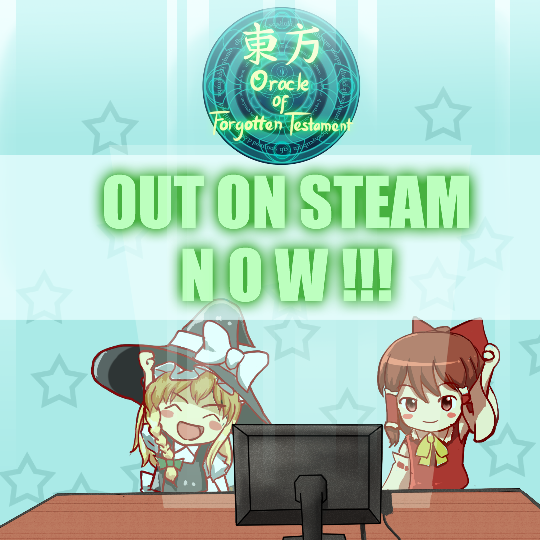 Oracle of forgotten testament is out on steam now!
Get your copies with 20% discount for the first week!

Gensokyo, an isolated land separated by the Great Hakurei Barrier from the outside world.
A land where incidents occur occasionally and eventually solved.
In one regular night, a thief snuck into the Scarlet Devil Mansion.
No one ever predicted that this is a beginning of a new incident.

A Series of Gensokyo Story

Oracle of Forgotten Testament is an episodic turn-based RPG based on Touhou games by ZUN. The game will auto-update itself every time a new episode is out!

Player will use several Touhou characters to explore every nook and cranny of Gensokyo and resolve every incidents ever happening.

ATB System, Spellcard, and Skill
Feel the heat of battle in Active Turn-Based battle system. The enemy won't let you stand idle in the midst of battle!
Player may use various spellcards and press all buttons correctly for maximum damage.
Skills may be used to replace your default attack to deal different affinity and ail various effects.

Placed Encounter
Player takes the lead, whether it's time to strike, retreat, be cautious, or be a tyrant who turns all the monsters into exp points without exception.

Alchemy
Alchemy is a journey to create masterpiece. Create many kinds of item as you learn recipes to aid you along your journey!

Dowsing
Unique only to the first episode, experience the ancient way of treasure hunting with the dowsing rod while dodging enemies!

This game is based off of Touhou Project by Team Shanghai Alice.

This game is developed by Dragon Emperors, and complies with the guidelines for releasing Touhou doujin games on Steam.