Swords and Sandals 5 Redux: Maximus Edition
Developer
Whiskeybarrel Studios
Publisher
eGames.com
Gladiator, it is time to go underground! For the first time ever, you shall step beyond the arena sands and into the dark dungeons of the world.Swords and Sandals V Redux, the latest thrilling installment in the world's greatest gladiator game series, has arrived!
All Reviews:
Mixed (142) - 66% of the 142 user reviews for this game are positive.
Release Date:
Developer:
Whiskeybarrel Studios
Publisher:
eGames.com
Tags
Popular user-defined tags for this product:
RPG Adventure
+
Reviews
All Reviews:
Mixed (66% of 142) All Time 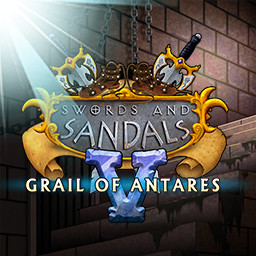 Gladiator, it is time to go underground! For the first time ever, you shall step beyond the arena sands and into the dark dungeons of the world.

Swords and Sandals V Redux: Grail of Antares, the latest thrilling installment in the world's greatest gladiator game series, has arrived! A unique mix of turn based gladiatorial arena combat and roguelike dungeon crawling, S&S V also boasts an epic 20 hour adventure in which our hero will journey to the frozen frontier town of Suul's Gateway - the home of Brandor's most terrifying beasts and hardiest gladiators.

Rumours swirl that the dread Emperor Antares, once thought vanquished in the arena, has returned. They say his soul lies in wait, under the vast mountain. Will you find the Grail and destroy him, saving the realm? Or will you take his place as a new evil overlord?


This is by far the largest and greatest Swords and Sandals adventure ever made. Only the greatest gladiators will survive the dark. Will you stand among the brave few?

The Grail of Antares awaits you!