D.R.I.L.L. is the first part of our VR wellbeing platform DynamixVR, made available to the public. Ship your space cargo through the galaxy, protect it from pirates, defend your base while completing a pain-relief VR exercise specially good for your shoulders and upper back. No more routine, just fun.
Reviews
All Reviews:
Positive (13) - 84% of the 13 user reviews for this game are positive. (84% of 13) All Time
Release Date:
Developer:
dfree
Publisher:
VR-Reel Media
Tags
Popular user-defined tags for this product:
Free to Play Action Sports Early Access VR
+

“There are 3 main reasons:
1. We'd like to develop our game with the feedback of the community.
2. Our venture capital partner requires us to release the game early in order to fund the project more.
3. In the current phase, our game is completely playable but lack of more levels, the complete story mode, and some of the exercise features. For the latter we really rely on the public. We plan to include training modes that is working best for our users.”

“We are planning to add a complete exercise mode with various VR training: Upper back, lower back neck and shoulders, the complete package for your physical well-being.
We create the whole story that you can play and move through.
With the complete story, it comes more levels, up to 20 stages.
Extra features such as Powerups and Rythm mode will make the game more exciting.”

“The game logic and the physics for the exercise platform is mostly finished. That means we can add/record any training and the engine will transform it to a game. However we have only 2 levels now with finished design.
Features are limited, there is no power-up system implemented yet, and there is 2 exercises as per now (upper back and neck)
Please refer to the "About This" section for more info.”

“No, it would be free to play all along with in-app purchases planned.”

“We have a great community among the physical therapist in Hungary and we are planmning to involve the major gamer communities we already know here.”

DynamixVR - D.R.I.L.L. is the first part of our VR wellbeing platform made available to the public. "A sound mind in a sound body" they say, we concentrate on the latter now: move and exercise in an environment never before. No more routine, just fun.

Ship the space cargo through the galaxy, protect it from pirates, defend your base while completing a pain-relief VR exercise specially good for your shoulders and upper back. 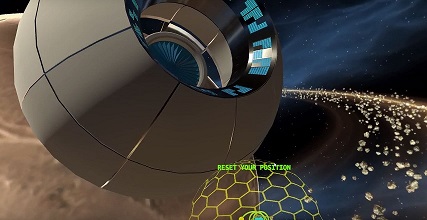 D.R.I.L.L. is a space tower defense Virtual Reality game, where you'll experience a fun way to complete routine exercises. You're advancing in the game and trought the levels, while you move and that's the goal. Ship and protect your cargo from enemy space pirates, with physical activity. Create your own set of movements in the editor and let the program transform it into an exercise mission. 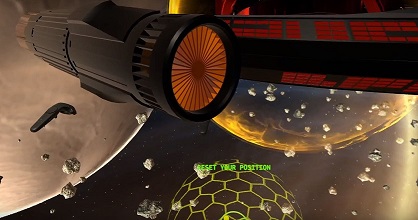 PLOT and How to play?

Fifteen eclipse ago a rare magnetism based life form has arrived to this solar system. The volcanic planet Ogun was impossible to colonise for humans, but the new arrivals have found new home in its iron lava rivers.

Human colonies with huge magnetic shields has managed to keep them away from habited areas, but in space Oguns are untouchable with their superior magneto ray and hyper jump technology.

To contain this treat, the plans of a planetary magnetic quarantine has been worked out by the brightest scientists of mankind. The final and most devastating task is the delivery of the specially engineered magnetism reflective components to surrounding planets. Since all transportation attempts has failed no one dare to fly those space quarters anymore they call the "lost space".

To handle the situation the Interplanetary Consulate has created a special space fighter group called D.R.I.L.L. Even if anyone who joins to this suicide unit will receive complete amnesty and a small fortune, still just the maddest and craziest criminals and mercenaries joined to direct response team.

You are a Lieutenant Colonel of the Intergalactic Federation Army, and responsible for two D.R.I.L.L. squadrons defending both sides of a precious cargo ship passing through the lost space. You command the fleet through holographic simulation from the base station.

When Ogun ships come out of hyper jump you have to keep the cross-hairs of the same side on their ship to target your fighters and electro shield to attack. This way you can delay the use of their most feared weapon: the magneto ray.

Ones the magneto ray gun is initiated, there is only one hope for the cargo ship left: for a short period of time a fighter can block the havoc by flying his spacecraft directly into the deadly beam. In military slang it's called "red-hot-hand". You can order your squadron to this defence move by keeping the trigger squeezed on the controller of the particular side. Use red-hot-hand when, and only when the enemy is firing to avoid unnecessary casualties.

That's all Lieutenant. You can fallow the moves and damages on the 3D map of the area below.

Now may proceed with your mission.
Bravery and God Speed!