Hammerting
Developer
Warpzone Studios
Publisher
Team17 Digital
Manage a Dwarven mining colony in the unexplored mountains of Mara. As a conflict rages in the Overworld, you will need to craft, explore and fight as you provide the allies of your choice with the finest weapons and gear to assist them in the battle for glory.
Recent Reviews:
Mixed (21) - 66% of the 21 user reviews in the last 30 days are positive.
All Reviews:
Mostly Positive (822) - 75% of the 822 user reviews for this game are positive.
Release Date:
Developer:
Warpzone Studios
Publisher:
Team17 Digital
Tags
Popular user-defined tags for this product:
Early Access Fantasy Strategy Resource Management Colony Sim Lore-Rich Base Building Management RPG Simulation Exploration Procedural Generation Mining Economy Automation Inventory Management Crafting Building Singleplayer Mod
+
Reviews
All Reviews:
Mostly Positive (75% of 822) All Time
Recent Reviews:
Mixed (66% of 21) Recent

“We have ambitious plans for the world of Hammerting. We plan to use Early Access as a time to work with our community to better refine the title, test and introduce new features, and work towards a finished product. Being able to support ourselves as a studio is also critical in this time, so the money we make during Early Access is vital to helping us achieve our goals.”

“Hammerting will take 6 months to a year to complete the feature list we've laid out to fully realise our vision for the game.”

“The full version will have more features, mechanics, and quality of life changes. We plan to use Early Access as a time to better refine how the title should perform, based on our plans for the game and community feedback.

Some of the additions you can look forward to are:
Expanded Cave Life and Exploration
Fluid System
Automation
Beauty and Décor
Enhanced Overworld
Fishing and Farming
Epic Crafting
Dwarven Relations and much more!

The Early Access version already offers a unique experience that will continue to improve and expand as we build upon the world and gameplay systems with each new update.”

“The Early Access version of Hammerting already has huge procedurally generated maps for you to explore, mine and gather resources to aid the fight raging in the Overworld. Your mining operation will have humble beginnings, but you will soon be expanding your colony as your reputation, and demand for your Dwarves craftsmanship, increases.

“The increasing size and scope of Hammerting may increase the price moderately upon full release or with significant content updates. However, players who purchase during the Early Access period will have access to all future content and updates released up until the full launch of the title.”

“We already have an extremely active Discord. We will be regularly talking to our community on here and via our social media channels After each release, we plan around the feedback received and prioritise the most important features, bugs and issues in order to show real progress in development to our community” 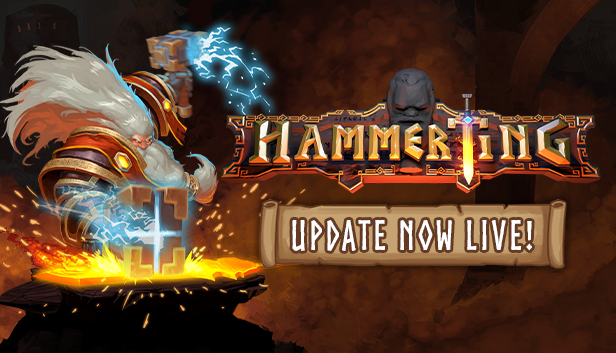 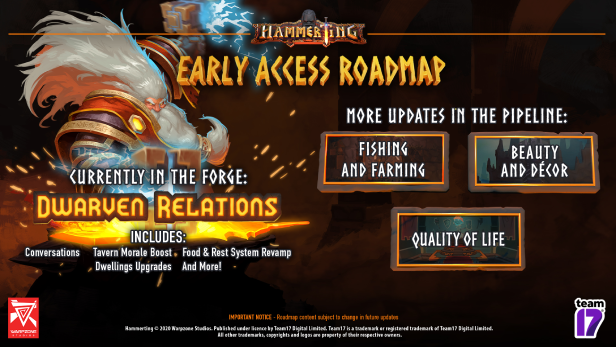 With a conflict raging on the surface, the Dwarves pledge to delve deep and as master craftspeople, will produce and supply what is needed to support their allies. From humble beginnings, you start with a handful of Dwarves who need to set up their operations quickly. However, as you progress, your small clan will expand and become known throughout the Overworld for their skill and premium craftsmanship.

Allies on the surface will have all manner of requests. Dwarves may find themselves asked to craft a plethora of silver swords against an oncoming vampire army, or alternatively, for an elf princess’ coronation, they’ll be tasked with creating nothing less than a Legendary Diamond-Encrusted Gold Crown of Divine Ruling +3.

Anyone can craft an Iron Sword, but only Dwarves can haggle a Crystal Cave Dragon to sell her fiery Plasma Breath, pump it up to an Andthril Forge of Doom and use it to craft the... Iron Sword +2.

With every strike of the hammer on an anvil, a skilled Dwarf has a better chance of achieving a critical result, giving you better gear.

Want to bring your own spin to Hammerting? The game has been built with modding in mind! A bundled SDK allows you to build pre-packaged mods, adding anything from new names, to plugging in full-blown systems in native C/C++. Documentation, additional hooks, and general support for this is something we plan for after Early Access.

Please wishlist the game, and feel free to come join us on Discord and obviously follow us on Twitter!