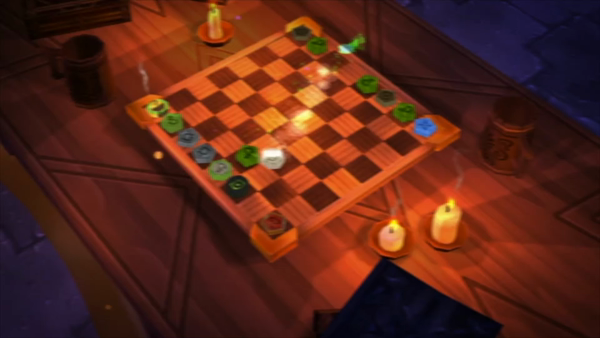 In a magical parallel world, a decent alternative to wars and duels was invented: combat checkers!
This game suits everyone: the rules are understandable even to the warchiefs of the barbarians from the Northern mountains, and its profound philosophy is highly appraised by fastidious strategists of the imperial court.
The dynamism and aggressiveness of this game is harmoniously combined with the fact that competitions are held in the cozy, homelike chambers of the imperial Minister of Magic.

6 types of checker pieces: regular, ice, stone, springboard, slimes, bombs. Each type has its own peculiarities (except for regular ones: their peculiarity is just to be ordinary and dream of a better fate).
3 skins for each type of checker pieces, giving in total 18 variations of appearance.
Varying number of rounds in each game that depends from the selected difficulty. On the maximal hardness you have to survive during 16 rounds, each subsequent of which is tougher than the previous one!

There is an option to play against each other on the same computer.
A decent kind of fun if your friends visit you and want to play some logical games together, while you don’t want them to touch your antique chessboard.

- At the beginning of the game each player has 8 pieces;

- Each player tries to knock the opponent's pieces off the board;

- The player, who successfully knocks out all the pieces of the opponent, is declared a winner!