Crazy Mob is 2 GAMES IN 1: DEFENSE AND RUNER WITH MONSTERS THAT MAY GO ON THE CEILING!

Sorry for my english please.


Hello everyone I'm a lone developer who likes to do games in his spare time.

I've done more than 10 games, but most likely you have not even heard of them!

Last time I did games for Android and this is the first game that came out on Steam!

I created this game for about a year and I am very happy and proud of my game.

I think many will notice some references to mario and lemmings in the game, but the gameplay of the game is completely different!

I tried to make the game fun and with a unique gameplay and swill I did, but of course you judge.

Are you tired of building turrets like in the usual Tower Defense? Do you want something new? Crazy mob will present you new FEELINGS.

Crowds of funny monsters want to get to your camp. Stop them, correctly using an unusual weapon.

Can You Cope With Crowd Monsters?

First of all, destroy monsters that can summon other monsters.
Freeze or blow up a large crowd of enemies.
Use the screen zooming to see most of the battlefield.
Build bridges to increase the path of monsters, but do not forget that bridges are destroyed by explosions. 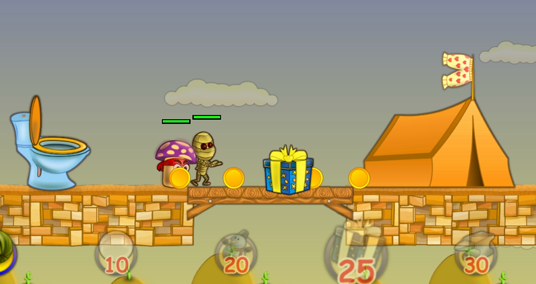 In the runner mode, you will jump, parachute in the form of a bra, beat the evil birdpig with a glove, turn on the shield so that you can not get cannon, change gravity and walk on the ceiling!