“The Donnerwald Experiment has reached a milestone where it's finally going in the direction we want. The main focus now is to add more content (the remaining days of the game), improve the art and of course balance changes.

Players often have a critical eye and notice issues developers may overlook or categorize as "working as intended", and in this modern age it's important to listen to their feedback, too.”

“The planned release date for the fininished version is October 2022, though in the end it might take longer than expected. Making the game fun and enjoyable is the highest priority, while finishing it is the second highest.”

“Certain parts like the UI still has some placeholder art and will be certainly be updated.

The finished games will have two main branches, both with 5 chapters.
Estimated playtime is 10+ hours.”

“After each fully released chapter, the game's price will be slighly raised towards the intended release price.”

“Give us feedback, bug reports, suggestions, wishes and anything else that comes to your mind while trying out the game.
We'll check out comments on Steam regulary, but you're also invited to say hello in our Discord Server.” 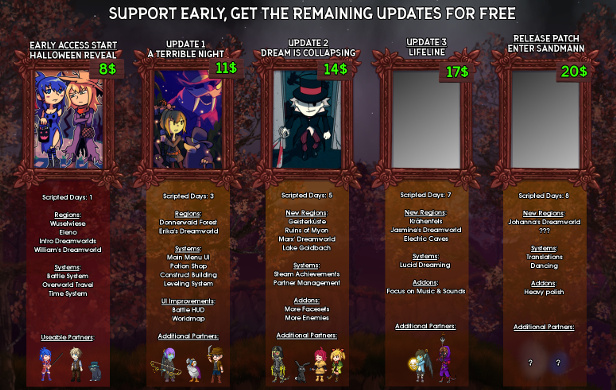 She was once a prodigy, capable of creating powerful automatons and other machines.
But three years ago, she lost her creativity during a nightmare.

One day a charming mole named Montgomery appears in her dreams.
He warns her that a Dream Demon "cursed" her with something known as the Mare Noctem.
The loss of her creativity is just one of the symptoms and she's about to turn into a monster soon.

Now the duo is hunting Dream Demons together and try to find a way to get rid of her curse before it's too late.

TDE contains a few instances of gory violence (for example the end result of beheading is shown).