“We are publishing in early access to test out the core game with as many people as possible.
We're buliding more modes, doing lots of tweaks, and adding more fun art and animation, and with your help 1.0 will be all it can be.

CURRENTLY HUMAN MULTIPLAYER ONLY: We would like you to be aware that the game currently is multiplayer only, and that bots have not yet been implemented. If you would like to play the game on your own, you would have more fun waiting until suitable modes are available.”

“We estimate the game will leave early access in late November 2017, when we have all the core features fully functional. But there might be changes to this, if we get the opportunity to spend more time on the game.”

“We are looking to have both single player and local multi player modes at the time of release. We want to let players choose their character, and we want to bring you an all original soundtrack.”

“Currently we have a Free-For-All local multiplayer mode for 2 to 4 players. In this mode we have 4 distinct characters of differing colors with each their own ship, all currently assigned to by default to the player numbers.

Finally we have 3 power-ups to strive for, hidden in alluring treasure chests, and 3 deadly obstacles to avoid. We currently have 1 original musical composition, a 2-minute fun and daring jig for the main mode.”

“During early access the game will be sold at a 50% discount. Meaning the price on Steam when we leave early access will be $10.”

“We will let you get a glimpse of the development process through video and written content, and we hope to do some audience involvement events.”

BEWARE THE DANGERS OF THE SEA

GRAB TREASURE CHESTS TO LOAD UP 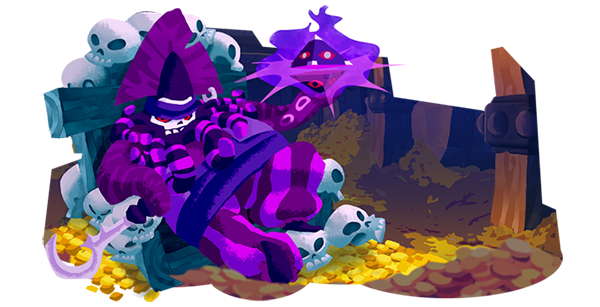 Scuffle Scoundrels is an arcade brawler for 2-to-4 rival captains of all ages.
As you can only fire from your broadsides in this game, you must flank your friends or family members to let them taste the hot end of your cannon.

It's a toony explosion of colorful fun, with devastating powerups, deadly hazards, and whimsical captains from all four corners of the world.

The game is playable with all fully PC-compatible controllers, though we currently recommend the X-Box variety.