Rise of Man is a pre historic strategy game with city building and survival elements. Can you guide your people through the ages and conquer all the challenges ahead of them.
All Reviews:
Mostly Negative (113) - 23% of the 113 user reviews for this game are positive.
Release Date:
Developer:
Darkcross Games
Publisher:
Darkcross Games
Popular user-defined tags for this product:
Simulation Indie Strategy Early Access
+

“We initially started work on the game in late 2015, Since January 2017 we have been working full time, We have a strong idea of the direction that we wish to take with the game and have many features planned for the future, However we would really value the input and ideas from the people that will actually be playing the game and that is going to be YOU. You will help guide the direction and future of the game and help us to make it as great as we believe it can be.”

“The full version will have more playable maps, more wildlife to interact with (there will be mammoths!) , fully dynamic weather with research the player will be able to unlock many new buildings, work stations and technology.”

“The game is fully playable, you can research and build many different buildings for your camp unlocking different capabilities.

“We will initially start at a low price point and throughout early access as we add more content the price may increase.”

“The community is going to be one of the most important guiding factors behind the game, While we have a road map of which way we are heading, the future will be decided by you the players.”

Rise of Man is a prehistoric strategy game, where you begin with a small tribe who have just mastered the ability to make fire, from here you will need to research new technology and harvest the local animals and resources with the aim being to ensure the expansion and survival of this small group, along the way you will have to protect yourself from wolves, bears and other threats.

Starvation will initially be the biggest threat as you move from the hunter and gathering nomadic life style of early homo sapiens to the later era of farming and settlements.

Homo Sapiens have been walking the earth for at least the last 100,000 years, after the last ice age began to recede ancient man started to migrate into northern Europe this is where we begin, In a harsh unforgiving climate life was difficult and the threats from the local wildlife and environment were deadly, archaeology shows how many of our ancestors met their demise, the question is will your tribe survive and thrive or become another lost civilization to be found slowly decomposing in the permafrost. 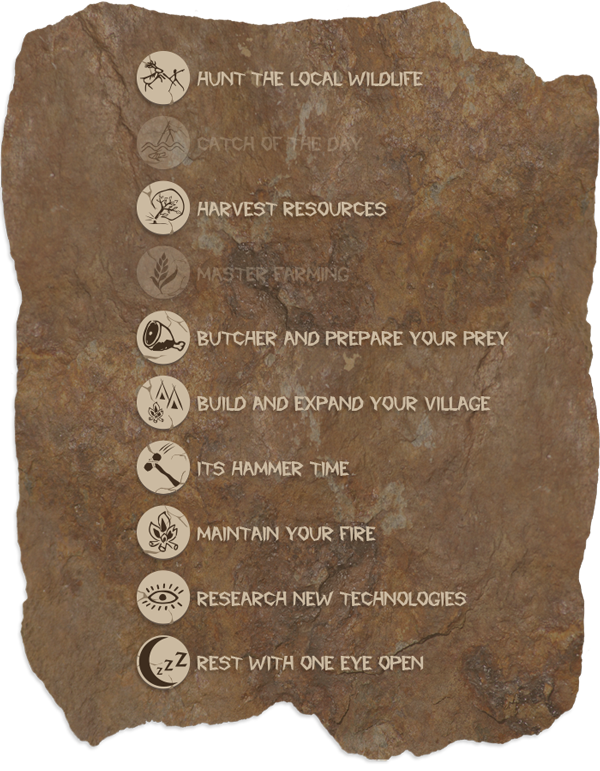