Check out the entire AGL studios franchise on Steam

6 items have been excluded based on your preferences.
View Community Hub 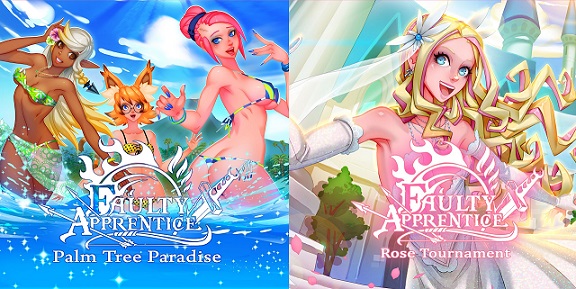 The DLC update takes place after the GOOD ENDING in the Base game/Main Story.
*You need a save data from Day 20.

All characters depicted in this game are over the age of 18 and older. Light ecchi or suggestive contents.

What is Faulty Apprentice?

Faulty Apprentice is an interactive visual novel set in a medieval fantasy world, featuring character relationships, minigames, and a riveting blend of suspenseful drama and comedy. Take on the task of defending a Castle full of virtuous maidens against an evil warlock and his legion of gruesome goblins! You've got twenty days to prepare for battle!

RELATIONSHIP PATHS
10 Romance-able characters! Each of the instructors has their own minigames and personality quirks. Depending on who you spend time Training with, or doing Jobs for, will determine their role in the Final Battle.

GOOD vs. EVIL
Will you inspire others for good or tempt them into evil? The choices you make will not only affect your fate but the fate of those around you as well.

MINIGAMES
Training and Jobs are broken down into three categories, Archery, Swordsmanship, and Magic, each with unique gameplay! STORY or CHALLENGE MODE- Enables you to enjoy the story without the minigame!

OPEN CASTLE
The Faulty Apprentice in-game timeline is broken down by day. Allocate your time each day by choosing from a range of activities. Training, Completing Jobs, Exploring Stars Reach Castle, or building Relationships. Each of these activities has its own complex mechanics that bring a wide range to gameplay!

LITTLE BOY, BIG CASTLE!
Over 30 characters to meet, 10 characters to date, and 15+ locations to unlock! Now normally fighting wars, slaying evil creatures, saving princesses, and otherwise kicking butt would be epic, but you're just a scrawny farm boy with nothing more than a letter of recommendation from a mysterious wizard.

ARE YOU A GOOD FRIEND?
Some routes of the game will lead to good, others to evil. Will you save the kingdom? Or will you bring about its destruction? The fate of Stars Reach Castle will be determined by you, the Faulty Apprentice.

Join the conversation here or Faulty Apprentice official Discord Server, and let the AGL studios team know what you think of the game. We read all of the player's feedback!