This content requires the base game Iron Sky: Invasion on Steam in order to play.

This content requires the base game Iron Sky: Invasion on Steam in order to play.

The Fourth Reich is flying in from the moon to say hello and destroy life on earth as we know it and we think you should do something about it. Kick the Moon-Nazi’s asses back to outer space with the all new Iron Sky Invasion Digital Deluxe edition!

Expand the Iron Sky Universe and keep earth safe and cozy at the same time! New in-game content features the fearsome scourge of the Moon-Nazis, the powerful new spaceship “Katar”, a $250,000 war-chest to purchase Nazi killing bullets, missiles and upgrades, and 25 precious salvage parts to help you get a leg up on knocking the Moon-Nazis down in the Madam President Salvage Mission.

Then, kick back and celebrate your victory with a gentleman’s beverage (not provided), the pulse pounding soundtrack on Mp3, gorgeous art from the film and game in the digital artbook, decorate your pad with posters from the film and game, 8 exclusive wallpapers and revel in the “making of” content, featuring a ton of photos and video! 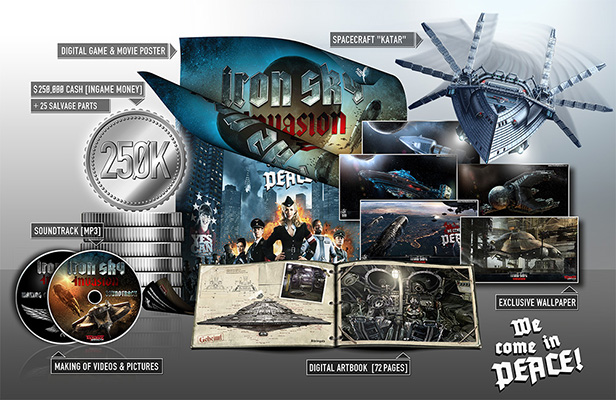