SteamHammerVR - The Rogue Apprentice
Developer
GamestormVR
Publisher
Showstorm Ltd
London needs a Hero! Can you help save old London Town? A truly immersive story adventure staged in the iconic locations of Victorian London. In your steampunk exo-suit you are armed with ingenious 19th Century weaponry, Seek and Destroy all the foes... You are the SteamHammer!
All Reviews:
Mixed (14) - 42% of the 14 user reviews for this game are positive.
Release Date:
Developer:
GamestormVR
Publisher:
Showstorm Ltd
Tags
Popular user-defined tags for this product:
Indie Strategy Action Adventure VR Shooter Steampunk Action-Adventure
+
Reviews
All Reviews:
Mixed (42% of 14) All Time

'The Rogue Apprentice' contains Eleven Missions which take you on a story based adventure staged in some of the most iconic locations around Victorian London, including, The Tower of London, Limehouse Warehouse, Trafalgar Square, Westminster, St Pauls and even the famous London Sewers. It's a hugely engaging and immersive experience with several types of challenging gameplay.

As the narrative unravels you will unlock each mission. more of the story and more powerful weapons, there are plenty of twists and surprises to enjoy as you discover the truth about your recruitment as 'The SteamHammer' 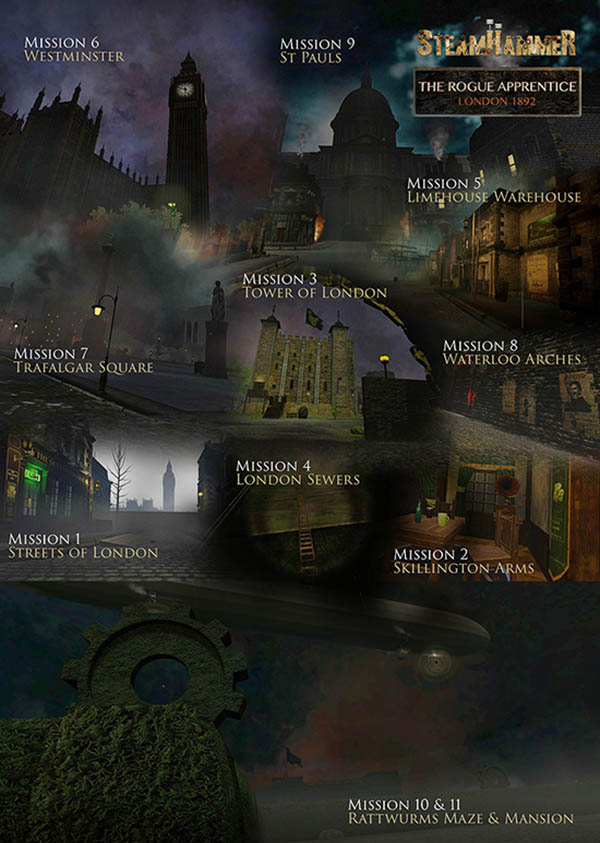 Seek & Destroy mode gives you Four full on 'Arcade Wave Shooting' versions of SteamHammerVR, with a mass of combos to boost your score, see how far you can battle your way to the top of the Global Leaderboards! Try your hand at 'Panic on the Streets of London' , Have a pint in the Skillington Arms for the hilarious 'Bar Room Brawl', keep an eye on the time in Westminster for the 'Big Ben Bash' or go to the Tower of London for a 'Kick in the Crown Jewels'!

Your adventure takes place in Victorian London 1892, but dark deeds are afoot, aside from the distant cries for help in the fog, the streets seem eerily quiet but you are soon to realise why, the dastardly Professor Rattwurm is attempting to enslave the fine English folk with his army of clockwork automatons raging havoc all over town.

Using this new-fangled steam power, some ingenious state of the art 19th century gadgetry along with the guidance and expertise of Doctor Obadiah Springhorn you should be more than capable of victory.

From the safety of Springhorn's elaborately furnished command centre in the Airship 'Horndenburg' the story unfolds as you plan your strategy and practise with the all the weapons which will be at your disposal. Your steam powered Exo-Suit has only two hands but your load out contains six unique and upgradable weapons which you can switch between during battle:- The Steam Hammer, The Steam Cannon, The Magnet Beam, The Rotor Saw, The Tesla Ray and The Rail Gun!

With some experimentation, a little strategy and a modicum of skill you should be able to complete all the missions and reveal the full story of 'The Rogue Apprentice'...if not you will be hauled back into the 'Hordenburg' for essential suit repairs and you can try again!

Carefully read and follow the Safety and Regulatory Guide provided with your HTC Vive before installing and using this software.

A portion of the Safety and Regulatory Guide, available from HTC's support web site, is reprinted below to provide you with an example of some of the safety procedures recommended by HTC. This is not the complete guide, you should read all of the guide from HTC. Please consult HTC's web site for the very latest information. As stated in the HTC Safety and Regulatory Guide, provided with your HTC Vive:

Ensure the Area Around You is Safe for Use of the Product
While wearing the product’s headset you are blind to the world around you. The image displayed in the headset
will not match the real world. Always use the product in a clear and safe area. Do not rely on the product’s
chaperone system for protection. Do not use near stairways, large windows, heat sources, or outdoors. Clear the
play area of people, furniture, and other things that may be obstacles or block you from freely moving around.
For example, if a pet comes into the room while you are using the product, you likely will not be aware of the
pet’s presence and you could trip over your pet while moving in the virtual reality environment.

It is recommended that the product be used only while under the supervision of another person who is ready to
warn of hazards that may arise while the product is being used. Examples of hazards that could arise include, but
are not limited to, tangling of a cable in a manner that presents a tripping hazard, pets entering the area where
the product is being used, and the user walking too close to a wall or another hazard).

Be Aware of the Cable and Connections
Keep in mind the location of the cable and connections running from the headset so that you are not likely
to trip over or pull on them while moving around or walking around the play area. Move your feet slowly and
carefully to avoid tripping, including on the cable. Make sure to maintain good footing. Tripping over the cable
or contacting obstacles could cause injury or damage.

Take Care of the Controllers
While using the hand controllers, always check that you have sufficient overhead and surrounding clearance
to allow you to fully extend your arms outward and upwards. Hitting persons or objects may cause injury or
damage. Hold the controllers firmly and always use the wrist straps. If released while using, the controller may
cause injury or damage.