Motion Controls First
The software was designed specifically for the HTC Vive with a "motion controls first" design philosophy. Unlike other VR video players, our interface is keyboard and mouse free so you can be completely immersed in VR without having to take off your headset to reach for obscure keyboard shortcuts.

180° / 360° Videos
Maximize your 180 and 360 degree video experience with full customizable settings for Distance, Tilt, and Height

Individual 180/360 Video Settings
Achieve your perfect scale and save your settings that are unique for each video.

Drag To Resize
Do you want to watch a movie on a 100ft screen? Now you can can with a flick of your wrist using Simple VR Video Player's drag and resize controls using motion controllers.

Even though Simple VR Video Player was designed to be easy and simple to use application for normal users, under the hood, there is a tremendous amount of advanced features you can explore and experiment with, especially for power users with high-end computers.

Super sampling is a brute force rendering technique that greatly improves image quality in virtual reality headsets. It works by rendering the 3D scene an X percentage higher than the physical resolution of the display and then resizing/downsampling the image back to your display. This results in an expensive form of high quality anti-aliasing that delivers a cleaner looking rendered image.

You can fine tune super sampling settings in real-time. 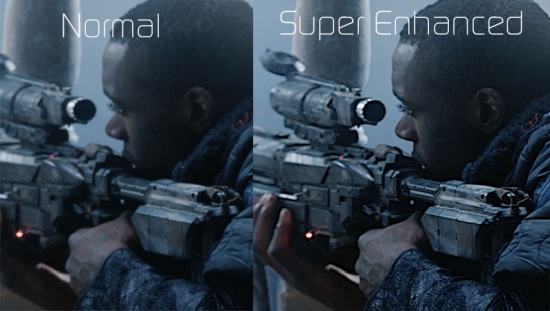 What Can It Play?

For more advanced users, you can change the video decoding engine to use another video backend such as DirectShow which allows you to use DirectShow decoders, filters, and splitters such as LAV and ffdshow. Just choose the best decoding option for you!

* Note: The player can't play Blu-ray discs since they are DRM'd and encrypted!

We wanted to create the first simple and easy to use VR video player to take advantage of the Vive and it's hand motion controls. We also wanted to make it powerful and customizable using familiar controls. No other video player for the Vive compares to Simple VR Video Player for its simplicity and ease of use.

* Thanks to to the Blender Foundation's Big Buck Bunny and Tears of Steel for their open source films used in our videos and screenshots. (www.blender.org)