Ruction is an open world adventure game where you embark on a journey through a jungle environment looking for clues that lead to your lost brother, and along the way discover the mystery of the golden tablet.
All Reviews:
6 user reviews - Need more user reviews to generate a score
Release Date:
Developer:
Scott Richey
Publisher:
Ruction Games
Popular user-defined tags for this product:
Adventure Indie Early Access Open World
+

“This is the first game produced on Steam from Ruction Games (everything you see is made by one person) and I would to like to iron out the glitches, improve game play and features. It's mostly early access because of the time it takes to create updates, but now that there is a full playable version, it's time for release and improvements along the way!”

“The game will likely be in early access for months or longer (or less) depending on ideas for major improvements and features.”

“Game design may vary depending on how people react to the early access version. Player missions and task are subject to change. There may not be too much difference for most players who play early access compared to the full version, except there may be improvements for lower end computers for increased performance gains and improved graphics for all. Any minor bugs could be fixed or if potential flaws are exposed.

I would like for every player to have a great experience. Some possible features that may be included later would be more specific and higher quality sound effects or improved scenery graphics. Most things shouldn't have a dramatic effect on actual game mechanics, but will increase the overall experience and immersion during play.”

“The current state is fully playable with possible minor glitches. You can play through the entire game as early access, but you may possibly encounter some bugs. There aren't any bugs that prevent you from playing the game all the way through (unless you die, but I would suggest saving your game periodically to avoid devastating misfortune). It would be best to save your game in between missions to limited the possibility of missions not saving correctly. But, if by some chance you are on a mission and you are having trouble with the objectives, you have the option to abandon the mission and pick it up again from the original NPC (the game will reset the mission so the bugs (if there is one) will be taken out).

If the controls get messed up on a load, just reload the game.

If you are playing on a lower end computer you may experience lag choke points during game play. For higher end computers you can expect minimal choke point lag (you may not even notice). You can always change the quality settings before you start the game for the best possible experience.

It is possible you may experience unexpected speed when coming in contact with a foreign object that may send you flying through the air, but hopefully not! Embrace early access and make sure you save your game!”

“Price will likely not change from early access to the full version.”

“Feedback is greatly appreciated! I'd like to know what you guys like and what should be changed. If people think there should be something added to the story line you would like added or an awesome change to the environment of the world I would like to know about it!”

Ruction is an open world adventure game where you embark on a journey through a jungle environment looking for clues that lead to your lost brother, and along the way discover the mystery of the golden tablet. You will find your brother by accepting tasks from natives, and in return for doing these tasks you will be rewarded with information about where your brother could be. While you pursue your objectives, you will explore the world, climb vines, hang upside down as you cling to roots across hundred foot drops, figure out what you should do next and strategize your next move! 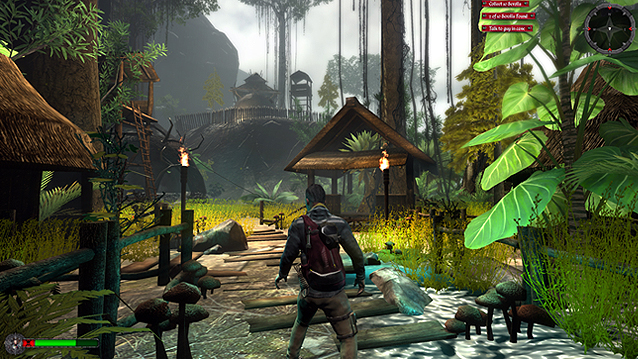