Stonehenge VR SANDBOX
Developer
VoyagerVR
Publisher
VoyagerVR
A profound learning experience enjoyed by thousands of families when it originated as one of the first room scale VR exhibits in a museum. With the new SANDBOX Mode, learning possibilities are expanded for people of all ages with the ability to build, paint and create their own ancient monument.
All Reviews:
3 user reviews - Need more user reviews to generate a score
Release Date:
Developer:
VoyagerVR
Publisher:
VoyagerVR
Tags
Popular user-defined tags for this product:
Casual Education Building Design & Illustration Sandbox VR
+
Reviews
All Reviews:
3 user reviews () All Time

“One of the store's marquee features is Viveport Premieres, which consists of VR content launching first on Viveport. Among the content debuting on Friday are Everest VR, Stonehenge VR, The Music Room and an all-new edition of the Blu, among others.”
CNET

“Educational VR experiences have the potential to go beyond what we see on the immersive surface, and let students feel a sense of scale or beauty that when visiting in real life may not actually experience.”
VR Scout

“The sessions have been selling out like crazy. The buzz is really building out there about VR.”
Official HTC Vive Blog

We'd love for you to check out our new VR game Alien Dawn.

Link is below and thank you!

Stonehenge VR began its journey as a profound learning experience, enjoyed by thousands of families, when it originated as one of the first room scale VR exhibits on display in a museum. The first location was the Pacific Science Center in Seattle, Washington, and the second was the Museum at Prairiefire in Overland Park, Kansas.

The Museum Mode serves as a wonderful entry point for the first time VR user. Starting with a built in tutorial, it prepares people of all ages on how to interact in virtual reality.

This VR experience includes narrated voice overs, interactivity, and animations that will give you a new appreciation for its fascinating history and beauty as you travel to the world famous prehistoric monument in Wiltshire, England.

Designed to expand the experience for the home VR user, Stonehenge VR 2.0 with SANDBOX Mode puts minimal limitations on the creator allowing them to roam across the map and create virtual worlds on any scale desired.

Build, paint and knock down your own version of the Stonehenge monument with motion controllers in real time. Design your own ancient monument around the original Stonehenge, or delete it and start in an empty field.

The SANDBOX is user friendly for the beginner with many tools to discover, and three types of locomotion options for the more experienced VR user. Many additional pre-made monuments for you to explore come built in to the Stonehenge VR SANDBOX.

Contact us by email or on social media and share images and/or videos of what you create! The founders, Christian and Jessica, would love to see what you’ve made with the Stonehenge VR SANDBOX.

Our favorites will be posted on our social media pages and even include your actual SANDBOX saved games in the application itself!

After having his mind blown by VR in 2013, and seeing how the tech could be used for education, Christian Bretz decided to change careers and went looking for financing to start his first VR project. When he wasn't able to get the financing necessary to hire a developer, he decided to teach him self how to develop VR software in the Unreal Engine using tutorials and information he found online.

Three months later he created the first version of Stonehenge VR, and less than a year after that it became one of the first room scale VR exhibits to ever be displayed in a museum.

First was the Pacific Science Center in Seattle, WA, then the Museum at Prairiefire in Overland Park, KS. It also became a launch title for HTC’s Viveport and has been featured by many tech and media publications such as, CNet, Variety and VRScout.

Christian and his Co-Founder Jessica Villarreal design all the software, and run the business themselves all out of their home in Los Angeles, CA. 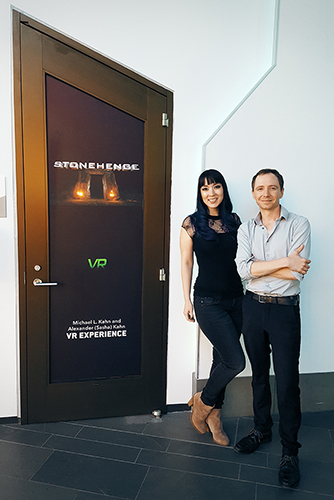