Party Saboteurs is a local multiplayer espionage party game for up to four players. Each player controls a spy who is trying to blend in an exclusive cocktail party to complete the missions. The catch? At the same time, they are all controlling snipers trying to identify and eliminate each other’s spies.
All Reviews:
Mixed (16) - 68% of the 16 user reviews for this game are positive.
Release Date:
Developer:
The Glitch Factory, Seize Studios
Publisher:
The Glitch Factory
Popular user-defined tags for this product:
Indie Strategy Local Multiplayer Pixel Graphics 4 Player Local
+

Let's go to the After Party! 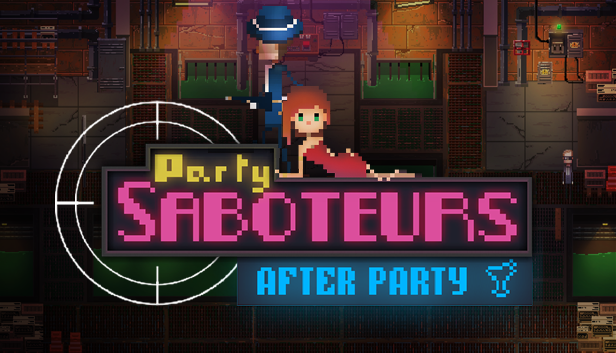 Sharpen your skills with the exclusive Single Player campaign! Get a whole set of new content! Let's celebrate it together with an awesome and limited offer!
Don't stop the party!

Party Saboteurs brings the tension and strategy from games like Spy Party and Town of Salem to the local multiplayer genre. The players have to move carefully, trying to blend in with the other guests and, at the same time, watching out for any awkward movements that might give up an enemy spy.

Each player controls a spy who is trying to blend in an exclusive cocktail party to complete their missions. The catch? At the same time, they are all controlling snipers trying to identify and eliminate each other’s spies. There are two ways to win: completing the missions first or killing the other spies.

The game's aesthetics are inspired by classic movies, immersing the players in an espionage atmosphere. Try to imagine James Bond and Austin Powers, infiltrated in a party hosted by Kim Jong-Un, competing to see who can sabotage it first. All delivered in an awesome-looking retro pixel art!

Party Saboteurs is primarily a competitive local multiplayer game, so, it's designed to be played on a couch by, ideally, 3 or 4 people (or 8, if you share controllers!). It also has a Single Player mode, that you can sharpen your skills and unlock new content.

Requires at least one gamepad to be locally played!