Serafina’s Crown is a visual novel with elements of fantasy, adventure and romance. You play as Odell Perin, the newly-appointed regent of Darzia as she tries to solve the murder of the queen and a host of other domestic and international crises.
All Reviews:
Positive (16) - 87% of the 16 user reviews for this game are positive.
Release Date:
Developer:
Woodsy Studio
Publisher:
Thesis Games
Popular user-defined tags for this product:
Adventure Indie Visual Novel Female Protagonist
+

“I was invested in the major storyline and Odell was a great choice to lead the tale.”
7/10 – VNs now

“This is definitely not going to be a game for action adventure loving gamers, but there is something about this game that if you're looking for political intrigue and maybe a little bit of love/lust, you might be interested to go through the game.”
7.9/10 – Altered Confusion

“The characters are living in a fantasy world unlike our own, and yet it feels real.”
C – Technology Tell

Serafina's Crown is a fantastical, dramatic visual novel with branching storylines, a stat-based strategy game, and dating-sim elements. In the game -- which takes place in the same world as Woodsy Studio's first release, Serafina's Saga -- you play as Odell Perin, an inexperienced young woman who must navigate political intrigue, romantic confusion, and an ongoing murder mystery while serving as Regent of Darzia. The branching storylines depend on your decisions: forming romantic relationships with other characters, finding Queen Belatrix's killer, and determining the next monarch. The game also features a dynamic debate system that allows Odell to argue certain points in court based on her accumulated stats. 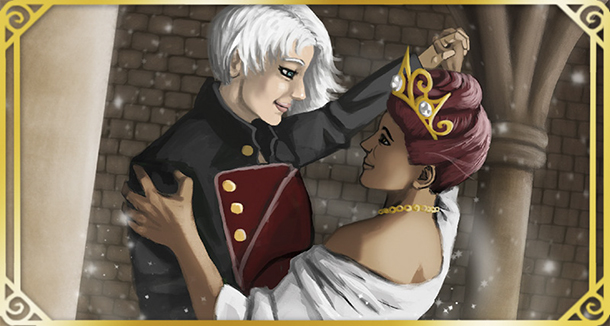 The sequel takes place seven years after the end of Serafina’s Saga. Grand Prince Robil Feldren dies of an illness -- and a few weeks later, Queen Belatrix Grandil dies in in the midst of a “hunting accident.” Serafina Elborn and her husband Reuben Jeridar are poised to take the throne, except for one big problem: Many nobles suspect that Reuben Jeridar arranged the assassination of Belatrix Grandil.

Players take on the role of Odell Perin, who is unwittingly thrust into a position of power. Due to her neutral stance, Odell Perin is elected to serve as Regent long enough to settle the ongoing disputes -- and thus determine who will become the next King or Queen of Darzia. 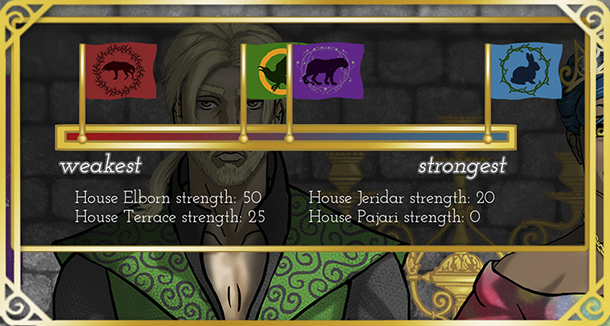 Serafina’s Crown is a visual novel with elements of fantasy, adventure and romance. Every decision Odell makes as Regent of Darzia will change the story arc to favor the different Gods. These decisions will allow Odell to get closer to solving the murder, but they can also make things more complicated for the inexperienced ruler. . . .

The game also features a debate system that allows Odell to argue points in court based on the stats she has earned throughout the game. Winning debates further Odell’s quest in finding Belatrix’s killer and choosing the next monarch of Darzia.

*WARNING*: This game contains mature content in the form of strong language and sexual themes