Check out the entire _Digerati franchise on Steam

'This looks like the most terrible mix of differing types of gameplay. I must have it!' - RPS Commenter

An authoritarian state pacifying the masses with propaganda. A brutal police force that shoots first then shoots some more.

An ordinary everyman named Eugene, dragged by coincidence and circumstance from a life of mundane menial tasks into a baffling world of sudden, inexplicable murder, hidden conspiracy and unrelentingly lethal robots with nasty sharp pincers and lasers coming out of everywhere.

Depicted in a distinctive Cyrillic pixel art style the cyberpunk city crackles with tech-noir intrigue and neo-digital deceptions. Using every tool at your disposal help Eugene to unpick the knot of mystery that he has become enmeshed within – your equilibrium will be rocked as you point and click a path through this briar patch of tangled meaning and unexpected quixotic quirks.

Will Eugene make sense of the conundrum that unfolds before him, learn who is an ally or a foe and collect lots of vinyl records for his listening pleasure? He'll race rapid hover bikes to earn sub-cultural respect, rub shoulders with high society in a post-modern nightclub, hack the brains of pursuing drone cops in thrill-packed chase sequences, strive to survive tense shootouts with merciless law enforcers and enjoy some 8-bit cowboy coin-op action in a dingy dive bar with a broken toilet. 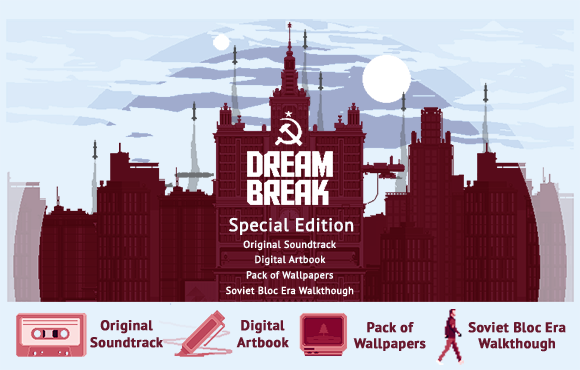