ChargeShot
Developer
Cowboy Color
Publisher
Cowboy Color
Shoot, reflect, and jetpack your way through ChargeShot -- a local-multiplayer, space-bounty-hunter, deathmatch game with a focus on fast-paced, twitch gameplay. Prove to your friends that you are the greatest warrior in the galaxy. No friends? No problem.
All Reviews:
Positive (26) - 84% of the 26 user reviews for this game are positive.
Release Date:
Developer:
Cowboy Color
Publisher:
Cowboy Color
Tags
Popular user-defined tags for this product:
Indie Action Local Multiplayer Singleplayer 4 Player Local Pixel Graphics Platformer
+
Reviews
All Reviews:
Positive (84% of 26) All Time 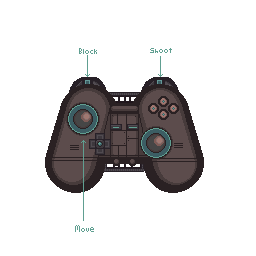 Annually, from across dozens of galactic sectors, men, girblons, women, and children tune in to their local space TV stations for the most anticipated event of the year: “ChargeShot”. Bounty hunters from across the known universe compete annually for eternal glory and a coveted $2,000,001 space-credit reward.

In ChargeShot, each player is armed with a Pulsar Cannon, capable of powerful blasts that bounce off walls and instantly destroy any life forms they touch; an Energy Shield, which can reflect Pulsar blasts and knock opponents into dangerous hazards; and a standard-issue jetpack for traversing the battlefield with deadly speed and grace.

Test your reflexes against up to 3 other friends (or enemies, as the case may be by the end of the night).