“We are so excited to make the game avalable for you as soon as possible!”

“Everything works and playable. Enjoy it!”

“In Early access we give you unique items that won't be available after release.
- Unique Early Access skins
- Unique combat vehicle (in Ultimate pack)
Each pack in Early Access has in-game bonuses, premium account and gold. After Early Access the game will go as Free To Play. Free version won't have such bonuses and there won't be exclusive items in packs.”

“We are always keep in touch with our players. We are creating the Badland Bandit's world with our Community. Your opinion is always important to us and we are glad to incorporate good ideas in the game.”

With Badland Bandits - Premium you will get:

"Buffalo" In Ultimate pack ONLY! 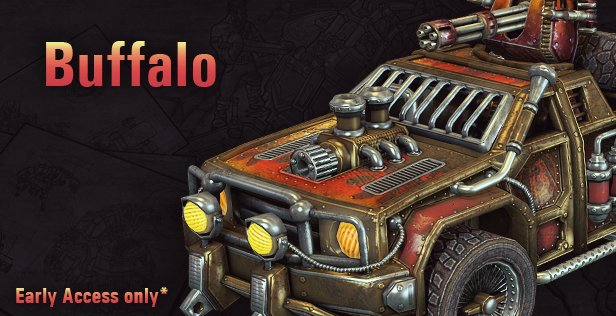 Aspid Beta - In Base Pack

It’s the first time developers have taken a risk to combine magical fantasy style and pragmatic steampunk. Players try the role of merciless warriors who destroy enemies using armored wheeled monsters. Each machine is a result of ingenious military engineering. In addition to tens of weapon and armor types all the machines are equipped with exclusive bonus modules.

Battles full of adrenaline take place on earth and in the air, under the blinding sun and in bitter frost. Interactive maps and well-detailed physics considering landscapes and peculiarities of all mechanisms supplement rich gameplay.

*For Mac-players : if you have an issue with the game (black screen) - please turn off Steam overlay.