“Our previous game, A Wizard's Lizard, greatly benefited from player feedback and suggestions. We thrive when we get the input of our community and feed off the excitement and support.

A Wizard's Lizard: Soul Thief has been in development for six months and we feel now is the right time to get players involved in the ongoing evolution of our game.”

“Our games always take us longer to make than we think they will ... but we should be able to ship in 2017.”

“Our plan is to include more dungeons to explore, more enemies to possess, and more shenanigan-inducing items to collect. In addition, we plan to create challenges which span multiple dungeons and secrets galore!”

“A Wizard's Lizard: Soul Thief currently includes three unique dungeons, the Haunted Library, Animated Kitchen, and Cursed Courtyard. Each dungeon includes numerous traps and monsters with unique abilities that can be possessed by the player. Players can collect Tickets which allow them to purchase persistent toys for Raga's Room.”

“The price of A Wizard's Lizard: Soul Thief will increase upon full release.”

“We thrive in open development and we're very active on our own forum, as well as the Steam forum and other social channels such as YouTube and Twitter.”
Read more
Notice: At the request of the publisher, A Wizard's Lizard: Soul Thief is no longer available for sale on Steam.
View Community Hub
See all discussions

A hardcore rogue-lite action RPG where you possess and play as monsters. Narrowly avoid death as you explore challenging, ever-changing dungeons, and possess any body you can to survive! 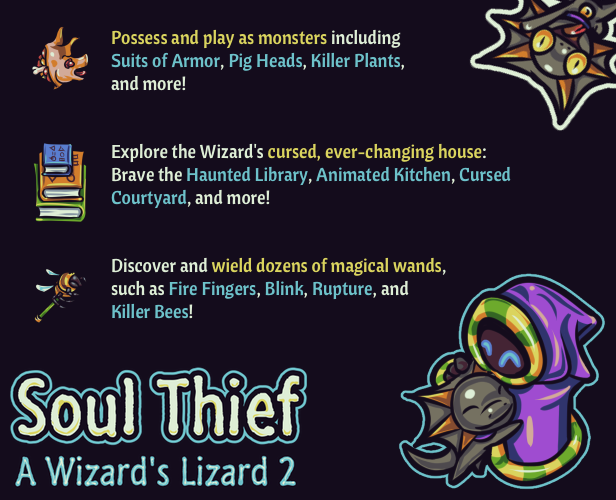