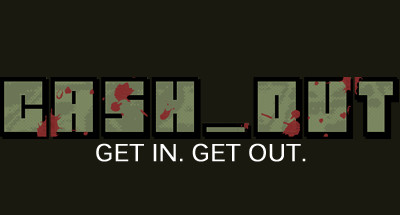 Cash_Out
Developer
Untouch
Publisher
Untouch
Cash_Out is a top down shooter with stealth and action in mind, where the goal of the game is to raid the building and steal cash. Levels are procedurally generated, with randomized weapons as well. There are many different items, clothing sets and skills that you can use to give you the edge while raiding.
All Reviews:
Mostly Positive (39) - 79% of the 39 user reviews for this game are positive.
Release Date:
Developer:
Untouch
Publisher:
Untouch
Tags
Popular user-defined tags for this product:
Early Access Action Gore Violent Top-Down Shooter Twin Stick Shooter Loot Stealth Procedural Generation
+
Reviews
All Reviews:
Mostly Positive (79% of 39) All Time

“Cash_Out has a lot of content, and with that comes bugs and unbalance. I want the game to release in a pristine state. The best way to do that is to allow people to play the game during the early access period. Along with that, suggestions and concerns will be taken into account to ensure the game is great.”

“I'm planning several features not currently in the game. I don't really want to talk about them in case something goes wrong and they can't be added. Something I can say is that a lot of content will be added in the Early Access period.”

“Functional, if not partially buggy.”

“The game will be cheaper during early access, if you are interested in buying the game, this would be the best time.”

“I'll be taking suggestions and criticism into account during this period, if you don't like something, feel free to post on the discussions tab and I'll try to get it fixed.”
Read more

Want to try out Cash_Out before you buy? This demo includes a short raid in singleplayer and multiplayer, and a small selection of loot, skills, weapons and items you can find in the full game!

Cash_Out is a randomly generated top down shooter that blends stealth and action to keep the gameplay moving. Build up your character with career mode, or jump right into the game with quickplay. Choose your class, stats and skills to customize your character to your playstyle. While in raids pick up items, weapons and clothing to give yourself the edge while raiding!

Cash_Out currently features a scripting system to allow you to make and upload unique room sets to the steam workshop, bundled with development tools to help you make levels. Along with that, the scripting language included allows you to go beyond basic level design, and add logic to your levels!

Co-Op for Cash_Out is currently in beta! Join up with up to 4 different players though TCP connection or through stream to raid a building together! It won't be easy though, the more players, the harder the raid is, so build up a character with 4 new class types to help you in the raid!

Cash_Out will be cheaper during early access, so if you're interested, now would be the best time to try it!