GameLoading: Rise of the Indies

GameLoading: Rise of the Indies
Production
StudioBento
Distributor
StudioBento
GameLoading: Rise of the Indies is a feature documentary exploring the world of indie game developers – their craft, their games, their dreams, and how they have forever changed the landscape of games culture.
All Reviews:
Mostly Positive (76) - 75% of the 76 user reviews for this video are positive.
Release Date:
Production:
StudioBento
Distributor:
StudioBento
Tags
Popular user-defined tags for this product:
Indie Documentary Gaming Dark Game Development Mature Linear
+
Reviews
All Reviews:
Mostly Positive (75% of 76) All Time

Buy GameLoading: Rise of the Indies

$9.99
Add to Cart
This product is not eligible for refund. Learn more

“You are going to want to see this!”
Kotaku

“You don’t have to be a gamer in the least to appreciate the astonishing documentary.”
Stack

“If someone asks what indie games are and why we love them, GameLoading would make a darn good answer.”
GameJolt

GameLoading: Rise of the Indies is a feature documentary exploring the world of indie game developers – their craft, their games, their dreams, and how they have forever changed the landscape of games culture. Disrupting the big-budget industry, indie games have altered the art form through their innovative, varied and personal games. Small teams of passionate and creative developers are offering an alternate voice to players. GameLoading captures this pivotal point in history, where video games have become more personal than ever before.

GameLoading: Rise of the Indies comes in two sizes - Film Only and Member's Bundle

We have hours of Extra Video Content that we are packaging into Short Films, plus two 20 min Micro Documentaries. These two Micro Documentaries explore the creators of Dwarf Fortress, and Japanese Indie Culture, and will be released within the next twelve months.

Upgrading from Film Only to the Member's Bundle is easy! 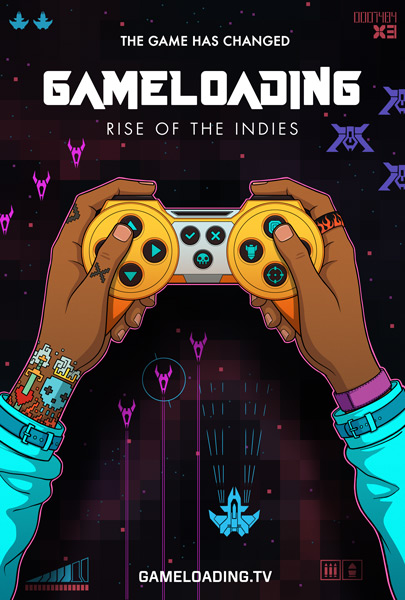