“The game has a fast-paced atmosphere, delivering on the nostalgia factor for fans of class 2D run-and-gun style games”
PC Gaming Enthusiast

Rustbucket Rumble is a side-scrolling, team-based, arena combat game. Players choose from 6 distinct robot characters of varying personality, ability, and weaponry, forming two teams of 3 robots. Players must work with their teammates to attack enemy robots until they are turned into bins of scrap, then transport the bins back to their base as scraps for recycling. It’s capture-the-flag where the players are the flags!

Once a team has collected enough scraps, they can create the mighty giant robot, El Rey Gigante Robo Jr., and unleash him to destroy the enemy base and win!

After years of making a mess of things, mankind has finally given up and left Earth to find a new planet to trash.

Left behind were the machines that once dutifully served their human masters. Among these were the robots of arch-rival companies Robotic Engineering Depot (RED) and Blucom Discarded Plastics and Metals. With nothing else to do, these now-leaderless robots escalated their competition into fierce combat.

Both sides are now desperately collecting materials to create a giant robot powerful enough to destroy the other. The RUSTBUCKET RUMBLE has begun! 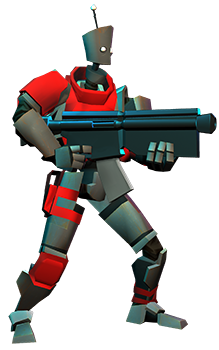 Grunt Model CLN-C has probably taken one too many hits, bullets, and rockets to the head, but he never gives up. Always helpful, Clancy is quick to heal teammates or provide cover fire from his automatic rifle. He doesn’t have any fancy gadgets to carry scraps, because he doesn’t need them. All Clancy needs to retrieve scraps is just some good old fashion determination and his metal robot arms. 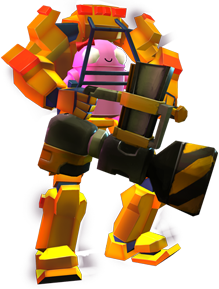 Engineer Model QT-3.14 has a cute and cheerful appearance, but make no mistake — Daisy is a technician of pain and punishment. Small in stature, she commands a powerful mech suit to help her build sentry turrets and carry drones. And she’s happy to get into the fray with her roller bomb launcher.

Ninja Model KA5-M13 was originally built for non-combat purposes. After the humans left, she finally got to pursue her dream of being a ninja assassin, but with a modern twist. Holograms, smoke bombs, and a cyber sword help her quickly dismantle enemies before they even know what happened. 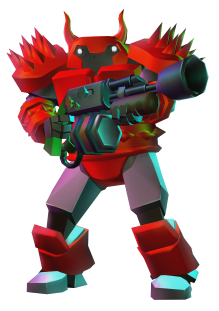 Brute Model HPM4X has an imposing stature and makes the most of it. Running head first into danger, he uses his powerful flamethrower to decimate enemies. His energy shield keeps him alive even in the worst conditions, and he’s so strong that he can easily toss scraps to his teammates. 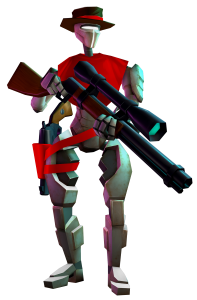 Sniper Model H0RN3T is as calm as she is deadly. Cold and calculating, she finds that the best place to position herself during combat is just out of sight from her foes. After dropping an enemy, she uses her extending grabber claw to retrieve scraps from afar. Even if her opponents do get the jump on her, she never loses her cool and uses stun grenades and a short range rapid-fire pistol to hold them off. 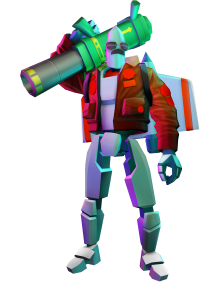 Bombardier Model DNGR-Z0N is a show-off. Thinking his jetpack puts him above the competition, he’s developed a cocky, prideful demeanor. His jetpack allows him to maneuver in and out of combat with ease and perform bombing runs. If he’s not careful, then Maverick may find himself in dangerous situations. But little do his foes know, that’s right where he wants to be. The danger zone. And when it seems like Maverick has bitten off more than he can chew; he uses his trusty rocket launcher to help even the odds. He can fly, get a burst of speed, and drop a number of bombs to the unfortunate robots below.