Ballads of Reemus: When the Bed Bites

Reemus the insect exterminator and his companion Liam the bear match wits with giant talking ants, termites and bed bugs in hopes of impressing the citizens of Fredricus once and for all! A fully voice-acted, funny, cartoon point and click adventure with animated cutscenes, side quests and more.
All Reviews:
Positive (32) - 93% of the 32 user reviews for this game are positive.
Release Date:
Developer:
ClickShake Games LLC
Publisher:
ClickShake Games LLC
Popular user-defined tags for this product:
Adventure Indie Casual Funny Comedy 2D Cartoony Cartoon Point & Click
+ 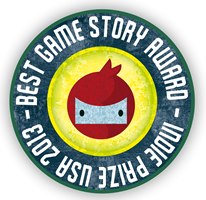 Buy Ballads of Reemus: When the Bed Bites

“...the complete package, perfect for both fans and newcomers alike.”
http://jayisgames.com/archives/2012/01/the_ballads_of_reemus_when_the_bed_bites.php

Reemus the insect exterminator and his companion/minstrel Liam the purple bear embark on a journey across exotic lands as they match wits with giant talking insects and bumble their way towards writing a ballad of their adventures that will finally impress the citizens of Fredricus once and for all! A fully voice-acted, funny, cartoon point and click adventure.

Journey to the Apnea Swamps to face the menacing but lethargic Bed Bugs. Escape the depths of the Termite Mound prisons and the jaws of the towering termite soldiers. Fight back against the powerful and scheming fire ants. Encounter bizarre creatures like the miles-long noserpillar and the hot-tempered honey bee. Marvel at the illustrious plant-life, like the ketchup and mustard plants, magnet flowers, mattress-shaped water lillies and illuminating light bulb vines. All this with tons of unique puzzles that tease your brain but have just the right amount of casual difficulty.

Ballads is based on the world and characters of the hit web game series The Several Journeys of Reemus and tells a completely new story. We brought in accomplished indie voice actor Josh Tomar to play the part of Reemus to give the universe a new level of immersion, along with a cast of 36 total voice characters.

Developed by ClickShake Games, an independent game dev studio founded by Jay "Zeebarf" Ziebarth and Steve "EntropicOrder" Castro. Ballads of Reemus is the team's first commercial game, developed over a 2 year period and totally self-funded with the help of over 500 pre-orderers.