THE JOYLANCER: LEGENDARY MOTOR KNIGHT is a new breed of action game, combining ultra-technical action with a simple control scheme and an artstyle inspired by portable games of old! Wield the divine power of the Motor Knights and save the world!
All Reviews:
Mixed (39) - 48% of the 39 user reviews for this game are positive.
Release Date:
Developer:
alpha six productions
Publisher:
Digerati
Popular user-defined tags for this product:
Action Indie Early Access Pixel Graphics Retro Female Protagonist Platformer
+

“Early Access will allow us to bring players an extended taste of what the final version of Joylancer will be like, using a variety of experimental modes and tweaks, and designing around comments and suggestions from players. The funds will help support us financially as we bring the game into its final stages!”

“Joylancer will be in Early Access until its Gold launch in March! Until then, we will be rolling out updates regularly, with new / revamped levels, graphic updates, and new features every update!”

“The full version of Joylancer will include a huge ton of levels, many more enemies and bosses, and expand on the universe's story. It will also include lots of new game modes, and tweaks to every other mode as we collect feedback from players.”

“The Early Access version of Joylancer has most of the core game in place, and is just missing more levels, enemies, and bosses.”

“Allowing the community to play the EA version of the game and offer comments and criticisms to improve the game, as well as various contests and periodic "holiday" events. We haven't 100% finalized our ideas yet, but we're working on them.”
Read more

“..manages to capture the spirit of some of the best 2D action games on the market....”
Destructoid

“Alpha Six Productions has created a game that only goes at full tilt, ludicrous speed at all times. Combat and movement have been permanently joined at the hip, creating a game that encourages the player to do everything as fast as they can all the time. Sonic, look upon your ruin and weep.”
Indie Game Magazine

“...the freshest platformer I have played in years... My life is better with Joylancer in it, and if you like games in any form, your life will likely be improved with Joylancer in it too. This game deserves our attention, may you too find the True Joy in Lancing.”
MouseNJoypad

After 256 years of peace in the lands of Antoria...

the ROSELIAN ARMY OF BATRATHYM has risen up once more to attempt to reclaim the land of ANTORIA that they lost in the 43rd War of Darkness.
Threatening to start War of Darkness 44, KING LANCELOT BARTHOLOMEW ROSELL of the ROSELIAN EMPIRE sends his beasts through the lands, corrupting and destroying everything in their path.

Refusing to hide from the incoming threat, a young recruit at the MOTOR KNIGHT ACADEMY named JOY LANTZ leaps into action!
With the power of DIVINE LIFE granted to the MOTOR KNIGHTS through their DIVINE ARMOR, and her powerful signature weapon, the hybrid motorized lance-drill BURST ARM known as the JOYLANCE, JOY refuses to let anybody stop her from saving the world-- not even the ACADEMY itself!

Allow your DIVINE ARMOR and your BURST ARM guide you to TRUE JOY! 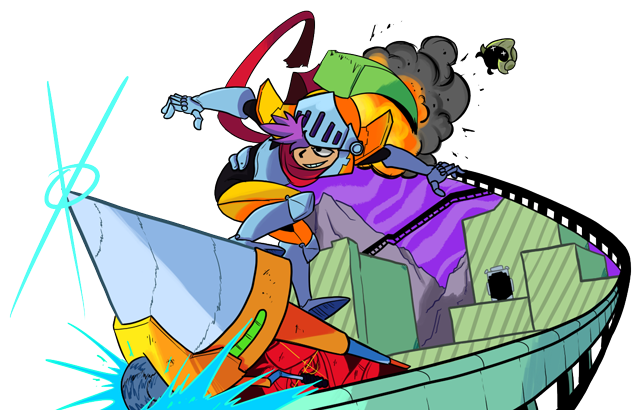 EXTREME MOTORIZED ACTION! THE JOYLANCER: LEGENDARY MOTOR KNIGHT has a large selection of local multiplayer components, allowing up to four players to play at the same time, in almost every game mode!
Get up to three friends in the action in the MAIN GAME by giving their souls to your weakened foes!
Cooperate with your friends to complete the mysterious DARK PALACE Mode!
Battle against each other in huge skirmishes and various duels in the MOTOR COMBAT mode!

We don't want Joylancer to be just a single-player experience; our goal is to create an intense action game that can be enjoyed by yourself, with friends, or even at parties!

THERE IS TRUE JOY IN LANCING!