“I want to get feedback from a large number of players, in order to tune the gameplay, content and possibly add features suggested by players.”

“I estimate a time of at least 5 months to finish all planned features and content, plus adding player suggestions.”

“The full version will have much more content, including quests, cutscenes, monsters, areas, mini-games. Some graphics currently being used as placeholders will be replaced.”

“The basic game play is done, the game is stable and the main region/story line is almost finished.”

“The price will be increased to reflect the added content.”

Start an adventure in a world full of monster hunters!
Plagued by a strange disease, the continent of Chroma is in panic, and a strange turn of events will turn you - a small kid - into a powerful monster hunter, capable of tame even Ulmaxia, the dragon king! 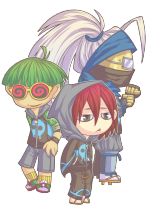